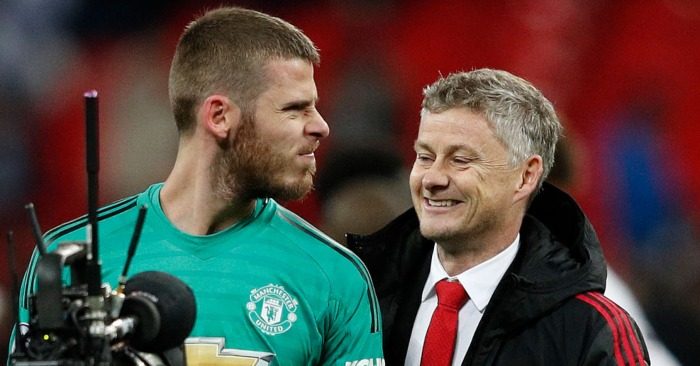 MAN UNITED TO PAY BEST PLAYER TO LEAVE
It does sound kind of perverse but The Sun claim that Manchester United will have to pay David De Gea a ‘whopping golden handshake’ of around £20m to leave for PSG this summer rather than leave for nothing next summer. But as the same journalist in the same newspaper claimed that the figure was £30m last week, we are taking this with a fistful of salt.

The theory is that PSG are willing to spend between £60m and £75m for De Gea, who is reluctant to leave now and lose the massive pay-day he would get as a free agent. So in order to grease the wheels, United will hand De Gea £20m (or maybe less as the figure is clearly getting smaller) to sod off now. Which is nice. We would take that deal.

OTHER MAN UNITED GOSSIP
We covered this on Sunday but if you missed it all – Manchester United have apparently bid £40m for Aaron Wan-Bissaka of Crystal Palace fame (which is not enough), while the club has apparently drawn up a list of options to replace Paul Pogba that includes Christian Eriksen.

OH AND SOME MORE…
Manchester United have apparently snubbed a swap deal from Inter Milan for Romelu Lukaku with Croatia winger Ivan Perisic being offered in return for the striker. This is not Jose Mourinho’s club anymore. The Serie A giants look set to part company with the Croatian, who was a major target for Mourinho during his time in charge at Old Trafford.

Gazzetto Dello Sport have revealed that Perisic had been offered to Ole Gunnar Solskjaer as part of a deal which would see Lukaku head in the opposite direction, but Manchester United have turned down the deal. The Sun claim that United want to get back the £75m they paid to Everton for the Belgian striker.

AND THE REST
Manchester City have reportedly offered Benfica wonderkid Joao Felix a contract worth just over £26million over five years….Arsenal boss Unai Emery has held talks with PSG right-back Thomas Meunier…Arsenal want Jordan Veretout but he is likely to join Napoli…Stoke want £23m for Jack Butland because they are mental…Leedshave made approaches to Liverpoolover wingers Harry Wilson and Ryan Kent…West Hamare prepared to do battle with Arsenal and Tottenham for the signature of Atalanta and Ivory Coast midfielder Franck Kessie…West Ham are in talks to sign Marseille’s France Under-21 midfielder Morgan Sanson.