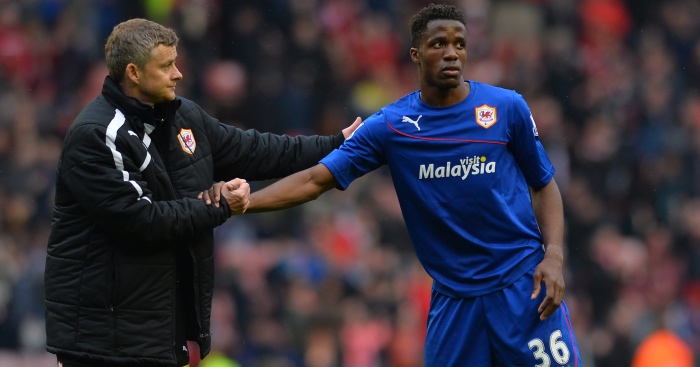 OLE EYES ZAHA FOR UNITED RETURN
It’s no secret that Manchester United want a forward this summer. Jadon Sancho is said to be their primary target while Callum Hudson-Odoi is also under consideration. But if Borussia Dortmund demand too much for Sancho and Chelsea refuse to sell Hudson-Odoi then, apparently, United have a Plan C which involves a player already well accustomed to life at Old Trafford.

Wilfried Zaha is on Ole Gunnar Solskjaer’s list of targets, claims The Sun, with the new United boss having already worked with the Crystal Palace winger. Solskjaer was in charge at Cardiff at the same time Zaha went to south Wales on a loan spell when he couldn’t get near the United XI.

Solskjaer recalls watching Zaha stay behind for extra training and that, combined with the 26-year-old’s twinkle toes, is enough to draw comparisons with Cristiano Ronaldo, which seems like the stretchiest of stretches to us, but OK…

Another forward being mentioned again as a United target is Douglas Costa. We can’t recall a time when the Juventus winger wasn’t being linked with United and Tuttosport have regurgitated that rumour, claiming the Red Devils, PSG and Manchester City are all considering moves for the 28-year-old.

A line on one striker already at Old Trafford: the Daily Mail reckons Marcus Rashford is close to signing a new £150,000-a-week contract.

COUTINHO ADMITS BARCA EXIT LOOKS LIKELY
United have also been the club mentioned most in connection with Philippe Coutinho, which is probably an indication of the amount of guesswork going on. Sport, though, reckons they have the inside track from some of the Barcelona star’s Brazil team-mates.

“I am thinking about leaving Barcelona. I know that it is a difficult decision, but it can be the best thing for my career,” Coutinho is reported to have told his compatriots in a conversation that in no way sounds made up. No, sir…

The Daily Express says United have enquired about the attacker and Chelsea have also asked the question. Other noises coming out of Old Trafford, though, suggest the Red Devils have no interest in signing the former Liverpool star.

AND THE REST
Bayern Munich could replace Niko Kovac with Jose Mourinho… Everton want to sign on-loan stars Kurt Zouma and Andre Gomes on a permanent deals… Arsenal have an agreement to sign Ituano’s 17-year-old forward Gabriel Martinelli, who was a targeted by 25 clubs… Max Kruse is stalling on a new contract at Werder Bremen and could leave on a free this summer, with Tottenham and Inter Milan interested.