Chelsea are also linked with Icardi, while Arsenal have two targets: Europe's most in-demand centre-back, and Burnley's back-up keeper. 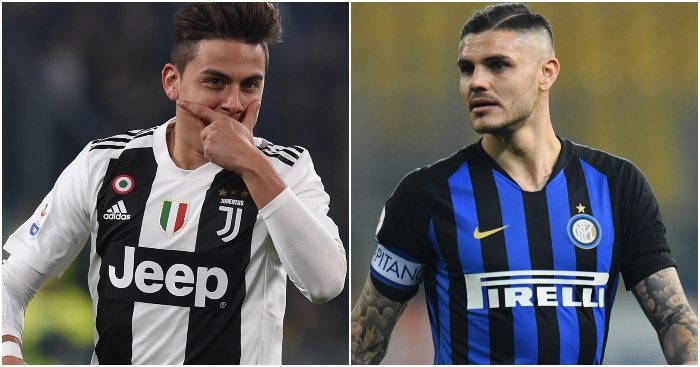 CHELSEA LINKED WITH ICARDI
Chelsea are making long-term plans to solve their striker shortage after sticking a Gonzalo Higuain-shaped plaster over the problem in January. Friday’s Gossip suggested the Blues fancied their chances of getting Higuain permanently on the cheap but if Juventus stood firm in their valuation, then Luka Jovic is an alternative.

The Sun on Sunday also reckons Mauro Icardi is being considered by Chelsea. The timing is certainly convenient – Icardi has just been stripped of the Inter Milan captaincy and Real Madrid have backed off the Argentina striker because, according to Marca, they don’t want to deal with the striker’s agent, Wanda Nara, who also happens to be the player’s wife.

“That will open the door for Chelsea to plot a move,” says The Sun, which appears to have done a bang-up job of adding together two and two.

UNITED OPEN TALKS OVER DYBALA SWAP
There were also whispers this week that Paulo Dybala could be heading to the Premier League, with Juventus said to be willing to offer the forward to Liverpool in part-exchange for Mo Salah. Now we are told that Manchester United are also keen on a swap deal of sorts for Dybala.

The Sunday Mirror claims the Red Devils are willing to send Romelu Lukaku to Juve to land Dybala as they prioritise the signing of ‘a mobile goalscoring striker’. The ‘exclusive’ also says United are keen on Icardi too, and talks have begun with both Juve and Inter as they consider their options.

For what it is worth, Lukaku would prefer to join Juve. Of course he would.

ARSENAL P*SSING IN THE WIND WITH DE LIGT
In today’s instalment of ‘moves that will never happen’, we bring you Matthijs De Ligt and Arsenal.

The Sun on Sunday reckons the Gunners have emerged as shock contenders for the Ajax centre-back. Given De Ligt could fetch nearly double Arsenal’s reported transfer budget this summer, it certainly would be a surprise.

The solution to Arsenal’s obvious shortfall: qualify for the Champions League and shift Mesut Ozil’s wages off the books. Good luck with that.

GUNNERS PONDER POPE SWOOP
Rather than chasing Europe’s most in-demand centre-back, a better use of Arsenal’s time might be to target one of Burnley’s back-up goalkeepers.

Nick Pope is apparently on the Gunners’ radar as they ponder a replacement for Petr Cech. The Sun reckons Unai Emery only has a back-up slot to offer with Bernd Leno retaining a greasy grip on the No.1 spot, but Pope may be tempted to swap Turf Moor for the Emirates if there is a reasonable chance of dislodging the German.

AND THE REST
Real Madrid will target Neymar this summer which could end Eden Hazard hopes of a move to the Bernabeu… Man Utd are prepared to offer David de Gea the largest basic pay package in English football history… United are fighting PSG for Benfica teenager Joao Felix… the Red Devils will also offer £90m for Napoli’s Kalidou Koulibaly… Man City want Atletico Madrid midfielder Saul Niguez… PSG’s Adrien Rabiot reckons he will move to Barcelona in the summer.