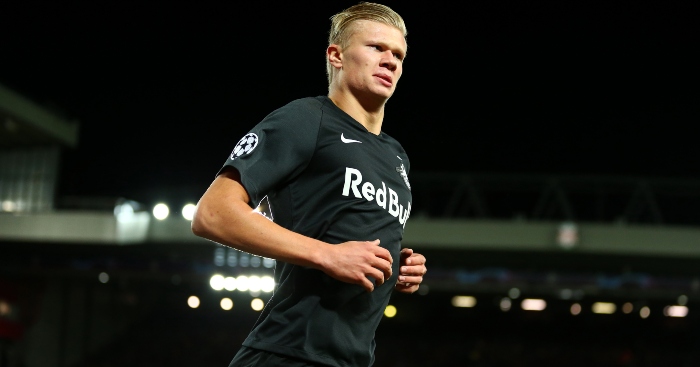 HAALAND HEADING FOR MAN UTD
There hasn’t been a day since the Champions League began this season that Erling Braut Haaland hasn’t appeared in some kind of transfer tale. Good news: his streak remains intact. Norwegian site Dagbladet is reporting that Ole Gunnar Solskjaer – who played with Haaland’s dad, of course, and also coached Jr. briefly at Molde – has instructed Ed Woodward to sign the forward as a priority in January.

Is anyone else a little unconvinced by Haaland? He scores a lot of goals and no-one would contest that he moves really well in the box, but… really? £70m/£80m already. Or, because it’s Manchester United and Woodward, most likely somewhere closer to £100m.

Is it also realistic to expect this to happen in January, too, as almost all of these reports suggest? RB Salzburg are probably not going to qualify from their Champions League group, Liverpool and Napoli seem to have places one and two sewn up, but they’ll parachute into the Europa League and, presumably, would rather like to have Haaland available to them in the New Year.

XHAKA OFFERED NEWCASTLE ESCAPE
As if Granit Xhaka hasn’t had a bad enough month, he’s now reportedly interesting Newcastle United. Imagine him and Jonjo Shelvey alongside each other – think of the tackling and the tantrums. Think of the Hollywood passes flying out of that midfield.

Anyway, The Telegraph claim that Steve Bruce will offer the Swiss a temporary landing spot in the Premier League if he does want to stay in England, even though Xhaka is interesting AC Milan and, most likely, would probably prefer a complete change of scenery.

GIROUD TO GERMANY
The Mirror see Olivier Giroud heading to either Borussia Dortmund or AC Milan in January. They also suggest that the German club expressed interest in Giroud over the summer, but were turned down.

Things have obviously changed. Giroud probably didn’t foresee Tammy Abraham taking his place at Chelsea or envisage making just six appearances for the club since August. He’s out of contract in the summer, so he’s certainly leaving at some point, but with a European Championship now on the horizon the issue is becoming more pressing.

Giroud is still involved with France, he actually scored in their win over Moldova last night, but he does need to play.

WHAT OF FOOTBALL’S MOST TEDIOUS MAN?
If AC Milan aren’t successful in their pursuit of Giroud, Calciomercato believe that they’ll turn their attention to Zlatan Ibrahimovic, who is now a free agent after leaving LA Galaxy.

Maybe. Ibrahimovic is 38 years-old and yet there’s a suspiciously high level of interest in him. Most likely, a lot of these stories are coming from his side of the table. A journalist actually asked Jurgen Klopp if he was interested in signing the player yesterday. Liverpool? Ibrahimovic can’t run.

AND THE REST
Shay Given’s heading to Chelsea as a goalkeeping coach… Ivan Rakitic is leaving Barcelona… Emre Can is being bombed out of Juventus in January… Liverpool want to add Sander Berge to their midfield…. Hector Bellerin is getting a bit twitchy at Arsenal.