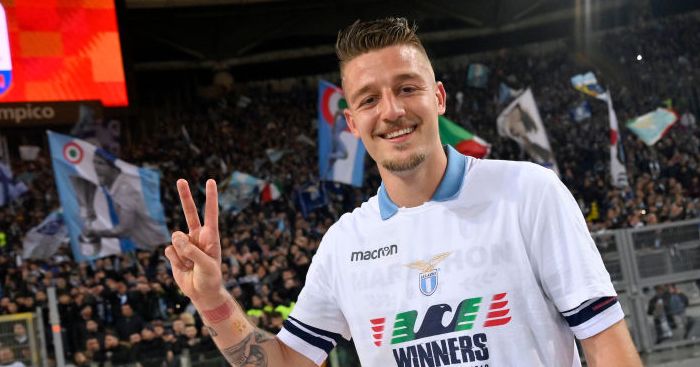 MAN UTD’S MIDFIELDER BID IN THE OFFING
Manchester United are not prepared to have their pants pulled down by Newcastle over their £50million valuation of Sean Longstaff, but it seems they might be willing to fork out over £70million for another midfielder.

The Red Devils are reported to have reignited their interest in Sergej Milinkovic-Savic and now it is being reported that a bid is forthcoming. According to Italian journo Gianluca Di Marzio, United will put £71.6million on the table for Lazio to consider.

The Serbia star was seen as a possible replacement for Paul Pogba, but United seem to be putting their fingers in their ears rather than listen to the France midfielder’s plea to leave Old Trafford. Ole Gunnar Solskjaer badly needs midfielders regardless of Pogba’s situation having lost Ander Herrera and Marouane Fellaini this year. Nemanja Matic is also said to be considering his future amid all the speculation of new arrivals, though Ed Woodward seems no closer to getting anything done.

NO BUDGING OVER LUKAKU DEMANDS
United could also do with a centre-forward, especially if Romelu Lukaku is off.

The Belgium striker is said to be keen to go and Solskjaer will carry his bags should United receive a suitable offer. The Sun reckons Woodward is insisting on £75million – the price they paid Everton two years ago – but The Guardian reports that Inter Milan sporting director Piero Ausilio has travelled to London to see if the two clubs can find some middle ground.

ARSENAL EYE REAL LOAN
Laurent Koscielny is also in London refusing to get on a plane with his Arsenal team-mates for the pre-season tour to the USA. Amid their captain’s revolt, the Gunners are also trying to secure new signings with the pittance Unai Emery has got to play with.

One way around their financial problems is to use the loan market and Sky Sports reckons that is the plan with Dani Ceballos. Tottenham are also keen on the Real Madrid midfielder but the 22-year-old is reported to prefer a temporary switch because he still reckons he has a future at the Bernabeu. But, right now, he has to play.

Sky Sports also reckons Arsenal are also close to signing William Saliba from Saint-Etienne, which seems to have been the case for weeks now. Time to sh*t or get off the pot, Unai…

PEPE’S NEW SUITOR
Arsenal were also keen on Nicolas Pepe before they realised the Lille attacker is way out of their price range. They aren’t alone; Everton and Liverpool have also been sniffing, as have Bayern Munich.

But Napoli are now on the scene too. The Serie A side have been linked with Rodrigo and Mauro Icardi while their pursuit of James Rodriguez is yet to reach a satisfactory conclusion. So Corriere dello Sport claims Aurelio de Laurentiis has turned his attention to Pepe after describing the prospect of meeting Icardi as a “colossal, enormous stupidity”.

AND THE REST
Barcelona will activate Antoine Griezmann’s £107m release clause before the weekend…Newcastle will pay around £5m compensation for Steve Bruce…Man City will move for Dani Alves if they can shift Danilo…Tottenham defender Toby Alderweireld is in talks with Roma…West Ham are eyeing Sampdoria Colombian striker Duvan Zapata as an alternative to Maxi Gomez.. PSG will renew their interest in Idrissa Gueye with a £27m bid for the Everton midfielder…PSV winger Steven Bergwijn is willing to bide his time over a move to Bayern Munich…Callum Wilson is set to sign a new four-year contract with Bournemouth…Hoffenheim forward Joelinton, a target for Newcastle, is also wanted by Wolves.