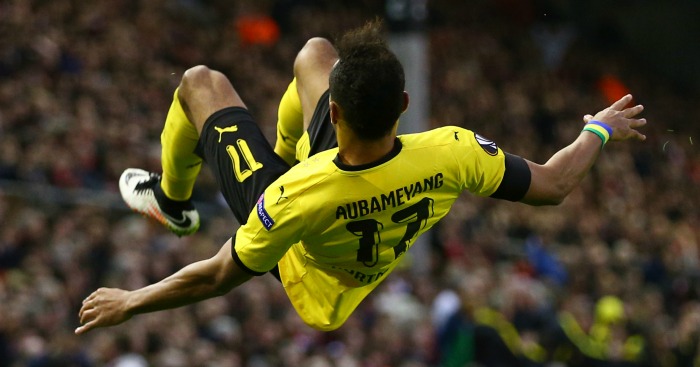 BRITISH RECORD FOR AUBAMEYANG?
He scored 39 goals in all competitions last season so it’s fair to say that Borussia Dortmund striker Pierre-Emerick Aubameyang is handy. But £65m handy? According to the Daily Star Sunday, that is exactly how much the Gabon striker will cost and ‘JOSE MOURINHO and Pep Guardiola are preparing for their first Manchester scrap’. That would be a new British record signing. Yikes.

Reports elsewhere have suggested that United will buy no other striker than Zlatan Ibrahimovic as they look to show faith in Anthony Martial and Marcus Rashford, while Aubameyang himself has hinted at a Dortmund stay, saying: “I feel really good in Dortmund, I don’t know what the future holds but I feel really good. I trust the club. There are many ways to find solutions and to make good transfers.”

MAN UNITED TO PAY £30M FOR BAILLY?
There are strong reports in both England and Spain that Manchester United have agreed a fee with Villarreal for centre-half Eric Bailly that could rise to £30m with add-ons.  According to The Guardian: ‘United have offered around £15m up front for the Ivory Coast international but a number of performance-related clauses could see the eventual fee reach £30m.’ The move would certainly make more sense than paying £45m for John Stones.

Bailly is just 22 but has established himself at Villarreal, starting 25 La Liga games as well as the first leg of Villarreal’s semi-final defeat to Liverpool, which they won 1-0. Leicester and Arsenal have also shown interest in Bailly, though a ‘Manchester scrap’ over Bailly has been avoided because City have instead concentrated on signing Aymeric Laporte from Athletic Bilbao.

SCHWEINI TO BE DITCHED?
‘Ditched’ is the word used by the Sunday Mirror but it’s important to remember that he can only be ‘ditched’ if he agrees to be sold or if they pay off his contract. You can certainly see that Schweinsteiger would struggle to find a place in Jose Mourinho’s Manchester United side, especially if Michael Carrick signs a new one-year contract, but what other club would pay his wages after he started only 13 Premier League games last season?

AND THE REST
Leicester want to sign Southampton’s Victor Wanyama as fears grow that their French midfielder N’Golo Kante will leave this summer…Everton and Southampton scouts were at the Netherlands game in Austria on Saturday night to check on Newcastle’s Georginio Wijnaldum…Manuel Pellegrini is a shock contender to succeed Ronald Koeman at Southampton…Stoke have targeted Jack Grealish after Ibrahim Afellay was ruled out until Christmas with damaged knee ligaments…Steven N’Zonzi is a shock target for new Chelsea boss Antonio Conte…Tottenham are interested in Palermo’s Italy playmaker Franco Vazquez…Crystal Palace are set to meet Newcastle’s £8m release clause for England winger Andros Townsend.