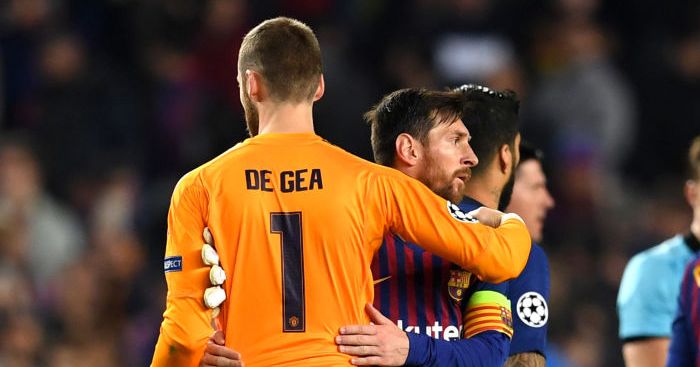 MIRROR EFFECT
This particular gossip columnist did smile at the Sunday Mirror suggesting that David de Gea’s apparent new contract will be ‘ending speculation over his future’. They know more than anyone that’s not how it works.

It will be a four-year contract with the option of an extra year, a basic wage of £250,000 and performance-related incentives that could take it up to £350,000 a week. So if he’s unerringly mint for one year it will cost United £18.2m; half a decade of perfect performances will cost them £91m. And be worth it.

The Mirror have put their balls on the line by stating that ‘United are expected to confirm the agreement within the next 24 hours, possibly before Saturday’s game at home to Leicester’. The story was published at around 11.20 on Saturday, so they have three or so hours left.

They describe it as both ‘a major coup’ and ‘an important statement of intent’ for the current fourth-placers. Quite. And we can all shut up about it now.

HIT THE BECK
If that all sounds rather expensive, spare a thought for David Beckham. His new MLS franchise Inter Miami FC currently boasts three players ahead of their planned first season in 2020; their fourth could be pretty special.

The Sun on Sunday run an exclusive claiming that Beckham ‘has sent his fixer Paul McDonough to London’ to discuss the future of Lionel Messi with the player’s father, Jorge.

Beckham ‘is aiming high’ and ‘wants Messi to be part’ of his impressive plans. The revelation that he can leave Barcelona for free if he so wishes at the end of any season led Beckham to send his representative ‘for a secret summit in the capital’.

The United States is apparently ‘sure to be a destination at some point’ for the 32-year-old, who Beckham would be ‘open’ to ‘sharing’.

AND THE REST
Inter Miami are also interested in signing 30-year-old Wales forward Gareth Bale from Real Madrid… England forward Callum Hudson-Odoi, 18, will seal a new five-year deal at Chelsea after returning from injury… Liverpool have opened contract talks with 27-year-old Senegal forward Sadio Mane… Denmark midfielder Christian Eriksen, 27, is holding out for a January move from Tottenham to Real Madrid… AC Milan and Inter Milan are interested in signing Serbia midfielder Nemanja Matic, 31, from Manchester United in January… Manchester United sent scouts to watch Fenerbahce striker Vedat Muriqi, 25, in action for Kosovo against England last week… Eighteen-year-old Argentine midfielder Thiago Almada, who was interesting Manchester City, has signed a new four-year contract with Velez Sarsfield… Wolves owners Fosun are understood to be looking for fresh investment to help the club challenge at the top of the Premier League and are willing to sell a 20% stake in the club.