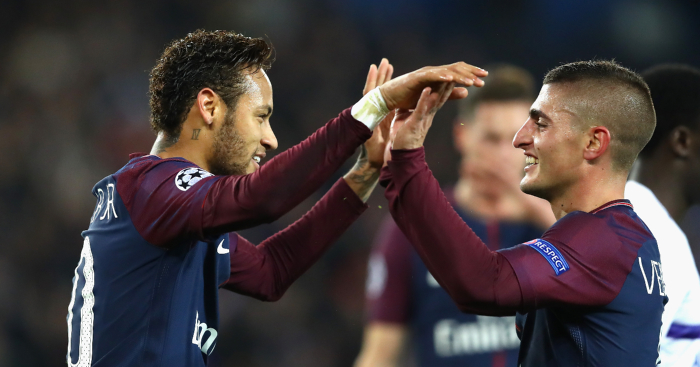 MANCHESTER UNITED PULL OUT OF ROSE DEAL
Given that we were told two days ago that Manchester United have abandoned plans to sign a left-back, we’re not that surprised by Matt Law’s claim in the Daily Telegraph that Danny Rose is no longer a target. Rose is a left-back, after all.

Still, it does represent an odd strategy from Jose Mourinho, who we’re told insisted to Ed Woodward that a central defender was more of a priority than a left-back. That’s despite buying Eric Bailly and Victor Lindelof and already having Chris Smalling, Marcos Rojo and Phil Jones. That squad is getting massive.

Law writes that interest in Rose could be reignited if Luke Shaw leaves, but again this just feels like a rehash of the reports of two days ago. We get it: a central defender is the priority.

VERRATTI BEING LINKED WITH OLD TRAFFORD MOVE
Now then, this really does sound like a load of guff. The Daily Mirror use a report from Calcio Mercato to claim that Marco Verratti could be moving to Manchester United. We will bear in mind that Verratti’s agent is Mino Raiola, and sigh a little about modern football.

Calcio Mercato say that Thomas Tuchel met with Verratti to stress to him how important he will be for Paris Saint-Germain next season, but also asked him to shed a few pounds before next season. At the same time, Raiola has been talking to a host of elite clubs – Barcelona, Manchester United, Real Madrid and Juventus are mentioned – about making an offer from Verratti.

Wonderfully, the only words on United are ‘is evaluating’, and yet from that the Daily Mirror glean that ‘the Manchester United boss well (sic) have the opportunity to add another midfielder – and one whom he really covets. The Red Devils have been offered the chance to take PSG midfielder Marco Verratti this summer.’

By his agent. Who has also spoke to other clubs. And has a history of touting out his players. PSG will probably have a say too.

CHELSEA VS JUVENTUS FOR SAVIC
Stefan Savic looked a liability in the Premier League, but he has improved vastly since leaving Manchester City. Having impressed at Fiorentina, Savic was signed by Atletico Madrid in 2015.

Unfortunately, despite playing 27 times in La Liga last season, Diego Simeone apparently wants to build his central defence around Diego Godin and Jose Gimenez. Savic is therefore looking for a move to a club where he would be guaranteed first-choice.

Not sure whether either Chelsea or Juventus can promise that, but these are the rumours. And the rumours are brought to you by Sky Italia via the Daily Mirror.

‘Juventus are looking to bolster their defensive ranks with some younger faces,’ the Mirror say. They do have Daniele Rugani at 23, and Savic is 27, but we take the point.

As for Chelsea, they need to move on a defender or two before they buy anyone else.

AND THE REST
Toby Alderweireld says he is open to the idea of staying at Tottenham Hotspur… Frank Lampard wants highly-rated Chelsea defender Jay Dasilva at Derby… Chelsea could sign Milan goalkeeper Gianluigi Donnarumma and send Alvaro Morata in the opposite direction… David Moyes is on a three-man shortlist to be the next manager of Fenerbahce.