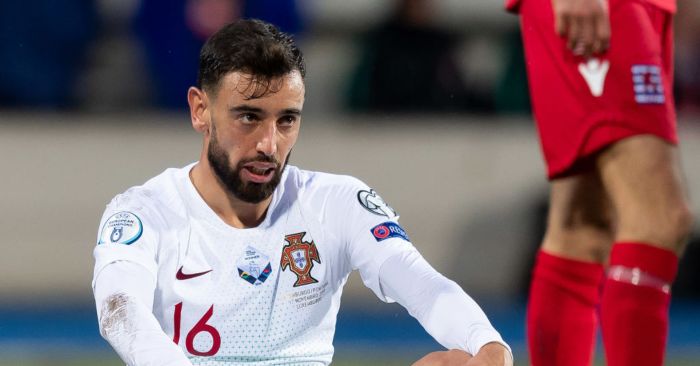 THANK BRUNO
And you thought Bruno Fernandes signing a new Sporting Lisbon contract would signal the end of that particular saga. You silly, silly little goose.

Take the Daily Mirror, for example. They claim the Portuguese’s new deal has ‘crushed’ Manchester United’s hopes of signing him, and simply dealt a ‘blow’ to Tottenham. Why? Because his £65m release clause has had another £20m tagged onto it. And both will definitely baulk at spending that sort of money for a player they need.

United in particular will surely retain an interest, while Jose Mourinho is understood to be willing to indulge in Tottenham’s previous fantasies. And the Fernandes contract really does not change a great deal in reality: it still expires in 2023, and the clause stating he would be owed £5m for any offer above £35m Sporting rejected has been removed.

So yeah, this one will continue to rumble on. Is it February yet?

CHOSEN JAN
Sky Sports are here to tell us that Jan Vertonghen, ‘open to holding talks over a new extension under previous manager Mauricio Pochettino,’ surprisingly enough ‘remains keen’ to do so with Mourinho at the helm. Shocker.

Roma and Leverkusen have been linked with a player who can talk to foreign clubs by January, and while ‘formal discussions have yet to take place’, Vertonghen would be happy to hear Tottenham out. Which is nice of him.

ALWAYS BELIEVE IN YOUR SOUL
On that note, Football.London’s Tottenham correspondent Alasdair Gold is a little more helpful. He says Mourinho ‘is looking for more certainty’ over the futures of his players.

So ‘there is a growing belief’ that at least one of Vertonghen or Toby Alderweireld can be persuaded to stay, while Christian Eriksen will likely leave.

Gold also says Tottenham ‘are not expecting’ to make any signings in January, unless it is as a replacement for any key players they sell. But if Eriksen leaves in the winter, Fernandes won’t be joining. Those hopes appear ‘to have ended’ with a new contract that apparently retains the same release clause.

Does anyone know what’s actually happening?

AND THE REST
David Beckham is lining up former Arsenal and France midfielder Patrick Vieira as the first head coach of new MLS side Inter Miami… Borussia Dortmund’s England winger Jadon Sancho, 19, is believed to favour a move to Real Madrid or Barcelona over Manchester United or Liverpool… West Ham could consider a shock move to bring back David Moyes as manager if they sack Manuel Pellegrini… Rangers’ on-loan former England striker Jermain Defoe, 37, is willing to take a pay cut to complete a permanent move from Bournemouth.