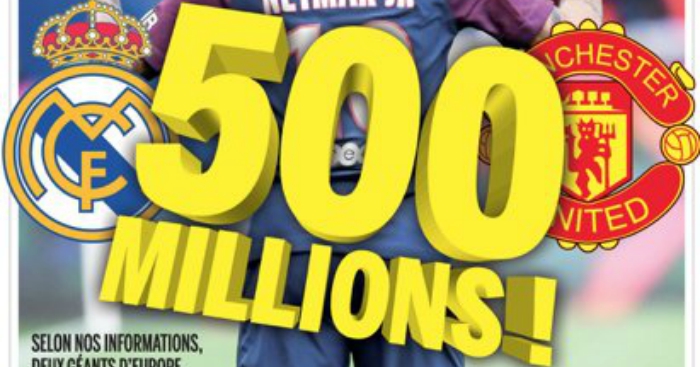 NEY WAY
Say what you want about Jose Mourinho’s tactics, but they absolutely work. His complaints about Manchester United’s supposed lack of spending have garnered a desirable response: a £25million bid for Alexis Sanchez has been lodged.

But that completely pales in comparison to claims from France on Thursday afternoon. Magazine Le10 Sport suggest that United are one of two clubs who will bid €500m for Neymar.

Ridiculous, of course. The magazine carries a picture of Neymar on its front page, a rather simple but eye-catching headline of ‘€500MILLIONS!’, some delightful WordArt imagery, and the badges of both Real Madrid and United.

Real have been linked with Neymar for some time, but the inclusion of United may well be a case of 1+1=500 sodding million. Le10 Sport are by no means sure that the Red Devils are the second club considering such a record-breaking offer, but throw their name into the hat anyway.

Their reasoning is simple: United have all the money, and they have tried to sign Neymar in the past. He remains one of Ed Woodward’s four ‘fantasy’ signings.

To be clear, there is no suggestion this deal will happen anytime soon. It is not until summer 2019 that Le10 believe the bids will come to fruition and, as Sport Witness points out, people will not remember by then. And as Sport Witness also says: ‘Well, we will, because we archive this stuff. That’s what we do.’

And heck, this would all make Neymar the most expensive 21-year-old, 25-year-old and 27-year-old ever. Glorious.

VARD KNOCK LIFE
So with €500m exiting the United transfer kitty in the future, they’ll be done there, right? Nope.

According to the Daily Telegraph, United are targeting three Premier League forwards this month. Sanchez is one, while Leicester striker Jamie Vardy and West Ham’s Javier Hernandez are the others.

‘United, whose players return from warm-weather training in Dubai on Friday, feel that Zlatan Ibrahimovic’s follow-up injury problems after his cruciate ligament injury have left them short of back-up for Lukaku, and that as a consequence his form is suffering.’

How could they possibly have known a striker who was out with a long-term injury when they signed him would still be out?

What Ibrahimovic has in common with Hernandez is that both were in our top ten summer signings who already need a move. The Hammers are indeed thought to be open to selling the Mexican, and want their £16m outlay back.

As for Vardy, Leicester would be far more reluctant to lose such a key player. He would cost around £35m – and that is even if the owners ‘would sanction a sale’.

AND THE REST
Chelsea manager Antonio Conte is likely to leave the club at the end of the season, and Juventus boss Massimiliano Allegri and former Barcelona coach Luis Enrique are the leading contenders to replace him… Liverpool are in talks with Leicester and Algeria winger Riyad Mahrez, but the 26-year-old would prefer to sign for Arsenal… Liverpool are willing to sell their 28-year-old striker Daniel Sturridge, but they will demand £30m for the England international… However, no club in the Premier League is prepared to meet Sturridge’s valuation, and his £150,000-a-week wages are another obstacle… Crystal Palace are targeting two new strikers. They have agreed a £12m fee for West Ham’s 28-year-old Senegalese striker Diafra Sakho and will bid £13m for Everton’s 27-year-old Senegalese forward Oumar Niasse.