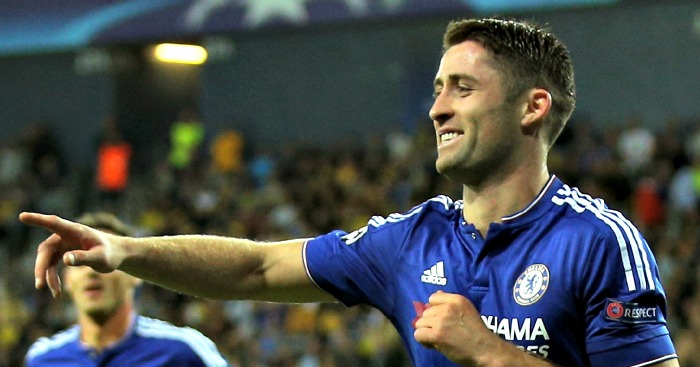 CAHILL WANTS OUT OF CHELSEA
This is pretty big. According to Reuters – not exactly known for spurious transfer gossip – Gary Cahill wants to leave Chelsea because he is worried that a lack of football will hamper his chances of playing for England at Euro 2016. Cahill has not started a Premier League game for Chelsea since Boxing Day, with his only appearance this year coming in the FA Cup against Scunthorpe.

Where could he go? He is 30 years old and presumably on pretty high wages.

EDER TO LEICESTER
No, not that Eder. Or that Eder. But the Eder currently at Sampdoria who has scored 12 Serie A goals this season. He is 29 so the Italian club are probably pretty happy to get £10m for the Italian international. According to MailOnline, he ‘has been discussing a three-year contract with Leicester worth around £30,000 a week but is also waiting for Inter Milan to follow up an enquiry’.

If the move for Eder fails, Leicester may turn to Loic Remy, who is said to be none-too-enthusiastic about a relegation battle with Newcastle.

UNITED AND BARCA BATTLE FOR MARQUINHOS
We’re starting in Spain, and Mundo Deportivo’s claim that Manchester United and Barcelona will fight each other (not literally) for the services of Marquinhos from Paris St Germain.

It would be inaccurate to label Marquinhos a raging success in Paris. He was signed from Roma for a ridiculous €31.4 million in July 2013, and has only played in 14 of PSG’s league games this season.

Still only 21, there’s plenty of time for the Brazilian to come good. Barcelona and United both reportedly see him as the long-term answer. He’ll cost a sh*t tonne of cash.

POCHETTINO WANTED BY CHELSEA
It’s taken a surprisingly long time for Mauricio Pochettino to be linked with the Premier League’s biggest clubs, given Tottenham’s wonderful form this season. Having been touted for the Manchester United gig last week, The Times believe that Chelsea have now put Pochettino on their shortlist.

Diego Simeone is the obvious next choice for Chelsea, but they could do a lot worse than Pochettino. He doesn’t get involved in bullsh*t, has a wonderful record of bringing through young players and already knows the Premier League. There’s obviously a question over his capacity to cope with the pressure of a club expected to challenge for the title, but the Argentinean hasn’t got much wrong over the last year.

VAN PERSIE TO STAMFORD BRIDGE?
Well, this one has come out of nowhere. The Daily Express have taken a break from regurgitating the spurious rumours of other outlets to come up with their own exclusive: Robin van Persie to Chelsea.

It is worth saying that the Express do include the clause ‘…should a move for Alexandre Pato fail’, which makes their story bulletproof should that loan deal go through.

It is also right to point out that the story is remarkably low on detail, although clearly that doesn’t mean it’s all untrue:

‘Van Persie, 32, is having a miserable time in Turkey at Fenerbahce, who he joined from Manchester United at the start of the season. Any move hinges on whether Chelsea can complete a loan move for Corinthians’ Brazil striker Alexandre Pato on Wednesday.’

And that’s it. Van Persie’s ‘miserable time’ constitutes 11 goals in 20 domestic games. It’s not that bad.

WEST HAM AND SPURS WANT WILSON
The Guardian’s Ed Aarons is one of the most reliable guys in the transfer business. When he talks (particularly on London clubs), it’s normally worth pricking up your ears and listening.

While the majority of Aarons’ story on Tuesday regarded West Ham chasing either Fenerbache’s Emmanuel Emenike or Galatasaray’s Burak Yilmaz, he also inserts a line on Bournemouth’s Callum Wilson that titillated us. We’re easily pleased at 365Towers.

‘Bournemouth’s Callum Wilson is also on their radar after his hat-trick in their 4-3 win at Upton Park last August, with Tottenham also believed to be interested. Wilson is currently sidelined until at least the end of March as he recovers from a knee injury.’

The obvious insinuation there is that, while West Ham and Spurs might be interested, both clubs will wait to see how Wilson’s recovery goes before making a possible summer approach.

AND THE REST
Spurs are looking at Barcelona’s Sandro Ramire, with a loan deal or a £3million transfer including a buy-back clause being discussed… Everton are keen to bolster their striking options before the transfer window closes, with Felipe Caicedo and Islam Slimani both on their radar… Chelsea will demand £80m from Real Madrid if the Spanish side persist in their efforts to sign Eden Hazard… Leicester will offer CSKA Moscow £15m for striker Ahmed Musa after appearing to lose out on Eder, who is favouring a move to Inter Milan… Middlesbrough have offered £9m for Blackburn striker Jordan Rhodes, 25, with a further £2m based on appearance.