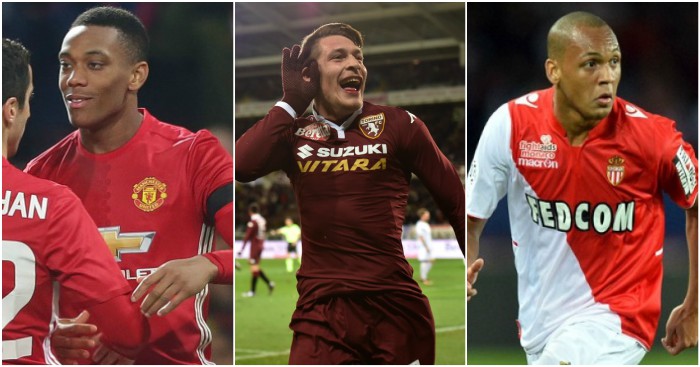 ERM, TOTTENHAM IN FOR MARTIAL?
Well well, ain’t this a big scoop on a slow news day. The Daily Mirror’s Adrian Kajumba writes that Tottenham are hoping to sign Anthony Martial this summer. Cripes.

Kajumba claims that Martial’s fall down the Manchester United pecking order has ‘alerted’ Tottenham, who wanted to sign the forward before he moved to Manchester. He also makes the very reasonable point that Antoine Griezmann’s potential arrival would hardly help Martial’s case for a starting place, although that may well depend on United’s Champions League qualification.

‘Spurs will be in the market for a forward with the pace and ability to beat players this summer, and Martial is one who could fit the bill,’ is the final line of the piece. ‘Could’ is probably the instructive word there, unfortunately.

RASHFORD STALLING ON A NEW DEAL
This one was an exclusive from Matt Hughes in The Times, and you can read about it right here.

ARSENAL, MANCHESTER UNITED AND MANCHESTER CITY WANT FABINHO
If you could hear from one person on Valentine’s Day morning, who would it be? Your loved one, working away on this special day? Your childhood sweetheart, the one you let get away and still think about? Or your family, because there’s nothing quite as special as familial love?

I can’t help out with any of that – you should have treated people better – but I can bring you quotes from Monaco defender Fabinho’s dad. That’s surely a decent backup option?

Well there you bloody well go. Get in there, Pep.

MAN UNITED ‘STEP UP’ BELOTTI INTEREST
Not going to lie to you, our bullsh*t alarms are going off on this one. The Daily Star use their Italian buddies TuttoMercatoWeb to bring us news that Manchester United have ‘ramped up’ their interest in Andrea Belotti.

TMW report that Chelsea, Arsenal and Liverpool are interested in Belotti, but that Manchester United are having him ‘thoroughly scouted’. We’re as shocked as you that United’s massive scouting network would be scouting one of the top scorers in Europe’s biggest leagues.

TOTTENHAM MUST SPEND £5M ON IRISH GOALKEEPER
Irish goalkeeper Paul O’Pez has been on loan at White Hart Lane from Espanyol for the whole of this season, not exactly getting regular first-team minutes. Reports on Tuesday suggest that Mauricio Pochettino likes what he sees.

In the Daily Mirror, Darren Witcoop writes that Tottenham ‘will have to pay’ £5m to sign the back-up goalkeeper. Importantly, that doesn’t actually offer any evidence that Pochettino is willing to pay that fee, nor too that the manager has made the decision. O’Pez still has another four months of his loan deal remaining, after all.

Still, it would be nice to see the next Shay Given in the Premier League.

AND THE REST
Manchester City boss Pep Guardiola is planning a £40m double bid for Atletico Madrid’s French brothers Lucas and Theo Hernandez this summer… Premier League referee Mark Clattenburg could be tempted to move to the United States or China… Everton, Middlesbrough and Watford are tracking forward Elias Kachunga, who is on loan at Huddersfield from Ingolstadt… Lazio have joined Arsenal and Watford in the race for 18-year-old Toulouse goalkeeper Alban Lafont.