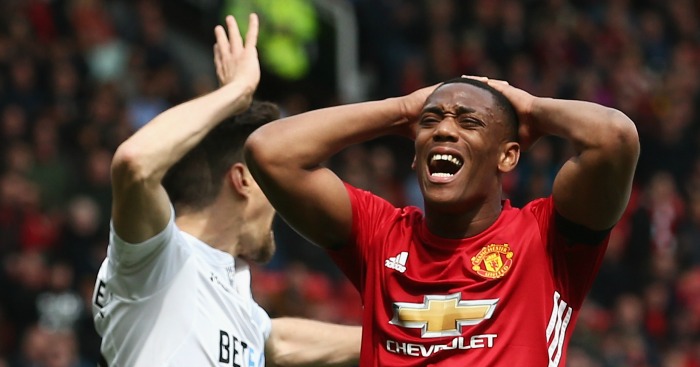 ARSENAL WANT MARTIAL TO REPLACE SANCHEZ
Now now. The Sunday People don’t usually mess about when it comes to their transfer rumours. They have one day a week to give you something spicy, and they intend to use it.

This week, Tom Hopkinson writes that Arsene Wenger is plotting a move for Anthony Martial as a replacement for Alexis Sanchez. He believes that Martial fits the bill as a Sanchez replacement, even though he’s clearly a completely different type of player.

Finally, we do like that Thierry Henry’s compliments of Martial are touted as him trying to tap up the player for Arsenal. Pretty sure he was just speaking on Sky Sports.

Martial cost Manchester United £58m. He’s going to cost Arsenal an awful lot of money if United are even prepared to countenance an offer.

ARSENAL ALSO WANT LOOKMAN
Another player linked with Arsenal is Everton’s Ademola Lookman, who has struggled for minutes at Goodison ever since moving to the club from Charlton.

The Sun’s Alan Nixon has an exclusive on the claim that Wenger wants to sign Lookman in January. Can’t help thinking that if he couldn’t break into Everton’s team, he might struggle with Arsenal.

MILAN TO BID £80M FOR AGUERO
More ballsy news in The Sun comes as an exclusive from Ken Lawrence, who somehow has the inside intelligence on Milan’s transfer business.

Lawrence writes that Milan will make a £80m move for Sergio Aguero in January. If that is true, it’s a deal City would be well within their rights to accept. He also casually drops into conversation that Arsenal had agreed a £60m fee for Aguero, but pulled out of the deal on deadline day. Hmmm.

Not sure if Lawrence is aware, but this week Milan’s owners were reported to have embarked on a mission to find new investors for the club, after it became clear that they did not have the financial capabilities to sustain the current levels of debt and spending. That doesn’t quite fit it with this Aguero claim.

LIVERPOOL VS CITY FOR GHOULAM
To the Daily Express now, and their claim that Liverpool will move for Napoli’s Faouzi Ghoulam, who is out of contract next summer.

Neil Fissler claims that Ghoulam has been tracked by Liverpool for a year, but that they now risk losing him to Manchester City. City are prepared to bid for and sign him in January rather than waiting for next summer.

Ghoulam is a left-back with 35 caps for Algeria. He has been at Napoli since 2014, when he joined from Saint-Etienne.

AND THE REST
Arda Turan will leave Barcelona in January… Jack Wilshere has claimed he is the fittest he has ever been… Sergio Ramos has signed a new Real Madrid contract… Arsenal’s Mesut Ozil is NOT a Manchester United target for next summer… Dele Alli and Harry Kane are both on Real Madrid’s list of potential transfer targets… Ronald Koeman has until the end of October to save his Everton job… Bournemouth will sell Benik Afobe to West Brom or Wolves in January.