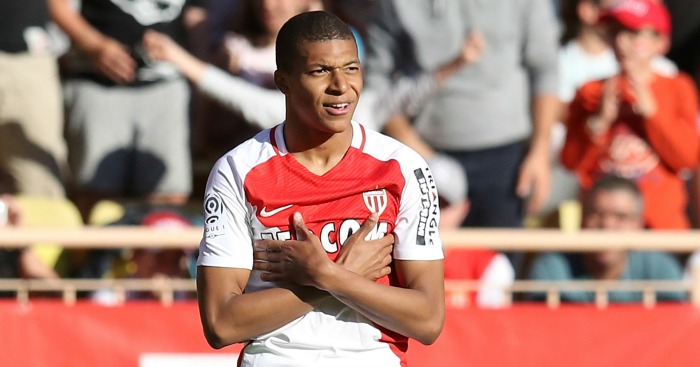 ARSENAL TO BREAK WORLD RECORD FOR MBAPPE?
‘ARSENAL are ready to make a real statement of intent and increase their offer for Monaco sensation Kylian Mbappe to a world record £95 million,’ says the ‘world exclusive’ in the Sunday Express. Alarm bells start ringing when the bylines in the newspaper and online are different and then ring even louder when we read lines like this:

* ‘Monaco have already knocked out an offer of £105 million.’

* ‘The teenager is the hottest property in European football this summer after playing a starring role during Monaco’s run of the semi-finals of the Champions League.’

* ‘He is also on the radar of the Manchester giants United and City but Arsenal are seeking to steel a march on both of them.’

* ‘Monaco are determined to keep hold of their most prized asset but it seems that their won’t be any let up with the bids from clubs wanting to sign him.’

* ‘And the best way would be to land a marquee signing like Mbappe who has been likened to a Thierry Henry to Wenger helped shaped into a Gunners legend.’

It’s not been written by somebody with a basic grasp of English so we are struggling to believe they have inside knowledge about Arsenal suddenly breaking the world transfer record.

DE GEA COULD BE DE MAN FOR £80M
On Saturday we heard that Manchester United’s interest in Raphael Varane could see lines of communication open with Real Madrid, and on Sunday the claim in the Daily Mail is that United are willing to sell goalkeeper David de Gea…for a hefty price ‘close to £80m’.

It is expected that Real will make a £40m move and United will raise their hands upwards in a bid to get mega-money for the Spaniard, though the bait of Alvaro Morata or Varane could force the price down. This is going to be a long, long old summer.

SZCZESNY TO LEAVE GUNNERS FOR JUVE
You would think that somewhere in north London, somebody at Arsenal would be wondering why Champions League finalists Juventus want their keeper Wojciech Szczesny to be Gianluigi Buffon’s long-term replacement, while they – who finished fifth in the Premier League – want to sell for just £14m.

Elsewhere, Marca repeat their usual claim that Hector Bellerin is Barcelona’s prime target for the right-back position, though they admit that Arsene Wenger’s decision to stay makes things more complicated. But they still believe a deal can be done for somewhere in the region of £43m.

VALENCIA WANT HERRERA
This is an odd one. We imagine that Valencia do want Manchester United midfielder Ander Herrera, but we cannot think of a single reason why they would believe that a) United would sell and b) Herrera would join. He is a key part of a United side that will return to the Champions League next season, so even the lure of working with Valencia coach Marcelino again is unlikely to hold much sway. And United would want rather more than £30m.

AND THE REST
Manchester City have had an initial offer for defender Benjamin Mendy rejected by Monaco…Everton are keen on West Ham midfielder Pedro Obiang…Brighton boss Chris Hughton is ready to make a £2m move for Fulham midfielder Kevin McDonald…Watford are considering a move for 22-year-old Montpellier forward Steve Mounie, who is also a target for West Brom…Sevilla want to sign Manchester City forward Nolito…Lazio winger Keita Balde will turn down a move to Liverpool in favour of signing for Juventus.