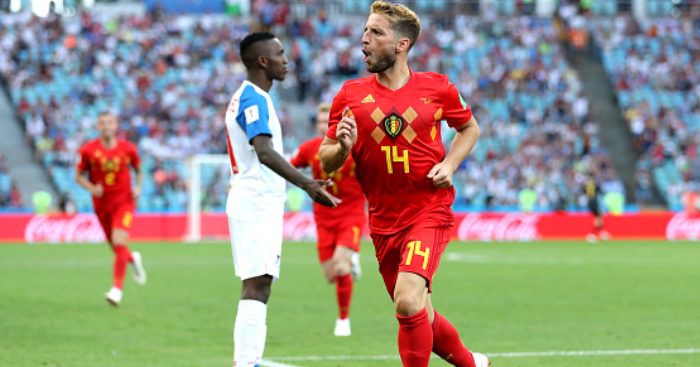 MERTENS IS SARRI’S FIRST CHELSEA TARGET
At some point in the near future, Maurizio Sarri will be named Chelsea’s new manager. Most newspapers on Wednesday report that Gianfranco Zola will be his assistant manager, and that Antonio Conte will finally be moved on. It’s been in the pipeline for a while.

One indirect result of that story is that Sarri is eyeing Napoli forward Dries Mertens as his first signing. In the Daily Telegraph, Matt Law writes that Chelsea have been chasing Jean Michael Seri for a while, but also could target Mertens.

If true, that’s a massive jump from Chelsea’s normal transfer activity. They typically prefer to buy young and let players develop, but Mertens is 31.

‘Sarri has been preparing himself for a move to Stamford Bridge and believes Mertens would be the perfect man to line up on the right side of a front three, as he does for Belgium,’ writes Law.

It’s worth saying that Mertens has said he is not interested in leaving Napoli, and doing so for a club not in the Champions League would seem unlikely.

BREWSTER COULD STILL LEAVE LIVERPOOL
Now here’s a weird one. Three days ago, a clutch of outlets reported that Rhian Brewster had finally signed a professional contract at Liverpool despite widespread reports that he would join a Bundesliga club. Brewster even did an interview where he talked about his future.

But on Wednesday, The Sun run an exclusive that Brewster is interesting Tottenham and Arsenal with a new contract not yet signed.

‘The framework of the new long-term deal has been agreed in principle with the 18-year-old’s representatives, but that has not stopped the North London pair checking on his availability,’ Warren Haughton writes.

This sounds like an agent leaking potential high-profile interest in order to get things moving, but watch this space we guess.

TOTTENHAM CHASING NDOMBELE DEAL
Good on Tottenham, looking after their supporters. There is a chance that Mousa Dembele will be sold this summer, but the club want to make sure those fans with Dembele replica shirts do not get screwed over. So they’re targeting Lyon midfielder Tanguy Ndombele.

Sky Sports say that Tottenham are interested in the 21-year-old, but also that no contact has yet been made with Lyon yet. Ndombele has only just moved to the club on a permanent deal having initially joined on loan from Amiens.

AND THE REST
West Ham and Burnley want Senegal World Cup star Moussa Konate… Aaron Mooy is an £18m target for Everton and Southampton… Crystal Palace have offered Wilfried Zaha a deal on more than £120,000 per week.