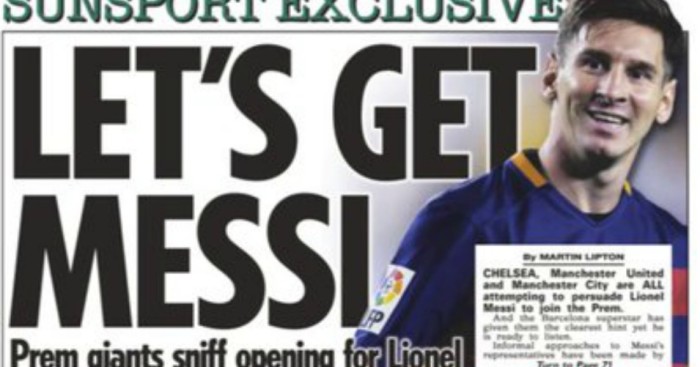 A MESSI STATE OF AFFAIRS
Well, this was inevitable. Disappointing and disheartening, but inevitable nonetheless. According to The Sun, Chelsea, Manchester City and Manchester United have all made ‘informal approaches’ to Barcelona and to Lionel Messi in particular.

The claims crop up every single transfer window and are soon dismissed as ridiculous for a number of reasons, but The Sun believe Messi’s current ‘ongoing issues’ (as they describe an alleged £3.1million tax fraud case) has led to the Argentinean becoming disillusioned with life at the Nou Camp.

As a result, the aforementioned Premier League trio have ‘informally approached’ old Lionel (they presumably have him on speed dial by now) and, apparently, ‘were pleasantly surprised by the reaction’. He has ‘given the trio the clearest hint yet that he is ready to listen’. Except The Sun never say exactly what that ‘hint’ is.

All this appears to emanate from an interview with Messi conducted by Guillem Balague earlier this week, in which the 28-year-old said, when asked whether he would ever play in another league: “I don’t want to look too far ahead. I live for the moment and at this moment I am with Barcelona in the Spanish League where I have made my living and where I live very well.”

Maddock insists no timescale has been set on the negotiations as manager Roberto Martinez is keen not to put any pressure on the England international, but the Toffees are keen to improve the 21-year-old’s current £30,000-a-week deal, which expires in 2019, to reflect his performances and persuade him to stay. As is widely reported however, Stones will request a release clause of some sort in case Chelsea come calling.

But what’s this? Paul Joyce of the Daily Express emerges from the bushes, and he is in the mood for some fisticuffs.

Joyce refutes Maddock’s claims – in a fashion – stating that Everton will delay talks with the centre-half so as to not distract him from his performances on the pitch. Amusingly, both use the exact same quotes from Martinez about “focus” and a lot of other stuff.

Joyce is slightly more reserved in his report than Maddock, admitting that talks may still be held between the two parties. If they are, Joyce says, Everton are unlikely to bow to Stones’ release clause demands. That probably won’t make him a happy bunny.

‘TOTTENHAM PLOT SHOCK MOVE TO SIGN HAZARD’
…is almost certainly how this one will be packaged. The actual ‘story’ is that Tottenham are interested in Thorgan Hazard, brother of Eden.

Spurs apparently had scouts watching Borussia Monchengladbach’s Champions League clash with Juventus in midweek, the second time they have watched the Bundesliga side in recent weeks. That’s basically it, really.

ANFIELD RETURN FOR SAHIN
Keep your family safe and lock your doors, the gossip apocalypse is upon us.

It’s always a sad day when Calciomercato and The Metro seem to collaborate to provide us some extra bullsh*t, but this one’s great. The Daily Express reported yesterday that Jurgen Klopp was interested in bringing Nuri Sahin to Liverpool after the German ‘slammed’ previous incumbent Brendan Rodgers for his treatment of the midfielder during his loan spell at the club a couple of seasons ago. Sounds juicy.

Except the quotes were from 2013. That, of course, didn’t stop the Express.

It is more than a little coincidental therefore that those lovely Calciomercatans report that Klopp wants Sahin at Liverpool. They don’t attribute the claims to anyone or anything, they just report that Klopp is a fan of the midfielder he once managed at Dortmund.

Within one hour and 51 minutes, The Metro had picked up on the rumour. We give it two hours until the Express start reporting this with ‘according to reports in Italy’.

AND THE REST
Italian giants Fiorentina are chasing Chelsea striker Radamel Falcao…Manchester United and Arsenal could look to reprise their interest in Paulo Dybala after Palermo president Maurizio Zamparini urged the 21-year-old to leave Juventus…Liverpool target Ruben Neves is not for sale, says Porto’s owner – but a number of Premier League clubs are tracking him…Chelsea and Manchester United will have to sump up £35million if they want to sign Aymeric Laporte from Athletic Bilbao (Daily Express)