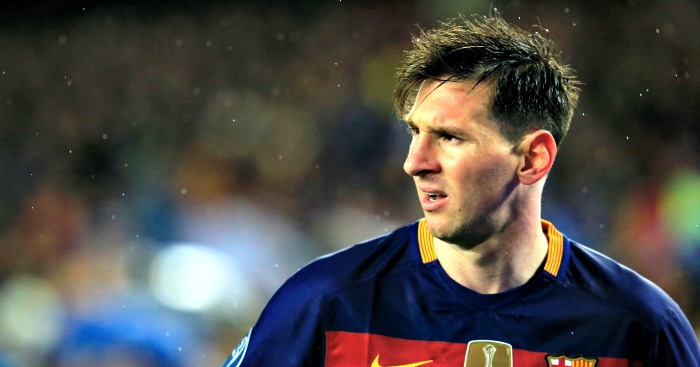 UNITED APPROACH BARCA FOR MESSI
Well, this summer’s transfer window is a little bit mental, isn’t it? Arsenal have been busy. Manchester City have made a big signing. Liverpool have acted quickly. And if you missed the news on Friday evening, the Gunners have made a £20m move for Jamie Vardy, and Manchester United are closing in on Zlatan.

United will not finish there. According to the Daily Mail, they have approached Barcelona twice in the past three weeks to ask of the availability of one Lionel Messi.

In what Adam Crafton dubs a ‘sensational move’, United are keen to discover whether Messi and Barcelona would be open to a deal, but only with a view to the club returning to the Champions League for the 2017/18 season.

Such a transfer would ‘smash’ the world-record fee Real Madrid paid for Gareth Bale, even though Messi’s deal at the Nou Camp expires in two years’ time. The Argentinean is thought to require ‘certain reassurances’ if he is to extend his stay in Spain. Crafton writes:

‘Sources close to Messi refused to rule out of the possibility of a move.

‘They admitted to Sportsmail that the player is increasingly ‘frustrated and hurt’ by the media circus in Spain that has surrounded a legal case investigating his tax affairs.’

The 28-year-old is currently undergoing trial for tax fraud, with a verdict expected to be delivered next week.

This is certainly not a new link – Wilshere was a player heavily linked with a move to the Etihad Stadium soon after Pep Guardiola’s appointment as manager in the summer was announced. The Spaniard is a known fan of the England midfielder. That does not stop Ken Lawrence of The Sun claiming his is a ‘shock name’ at the top of City’s wanted list, of course.

The main reason for City’s attraction in the 24-year-old appears to be to boost the homegrown quota at the club. Lawrence claims that Wilshere ‘is likely to be interested’ in a move because Granit Xhaka’s arrival at Arsenal means more competition for midfield places. Some strange logic is involved.

PJANIC PUNS
Manchester United are pressing the Pjanic button. Pjanic on the streets of Manchester. United are having a Pjanic attack. United are signing Pjanic over Isco.

Get them out while you can, because Manchester United, not for the first time, are targeting a move for Roma midfielder Miralem Pjanic. The 26-year-old has two years remaining on his contract in Italy, but United are keen on the deep-lying playmaker.

Samuel Luckhurst also tells us that Jose Mourinho wants to sign ‘at least four players’ in his first summer window as manager, with a right midfielder, a centre forward, a central midfielder and a central defender identified as his priority positions. The Portuguese wants to get his work done early this summer, and Pjanic’s Bosnia and Herzegovina are not headed to the Euros. Simple.

AND THE REST
Real Madrid will again make a move to sign Manchester United goalkeeper David de Gea this summer, but new Red Devils boss Jose Mourinho is determined to keep the 25-year-old at Old Trafford…Everton want to conclude a deal to make Southampton manager Ronald Koeman their new boss within the next 24 hours…The Saints are facing an exodus of players with midfielder Victor Wanyama and strikers Shane Long and Graziano Pelle set to follow Ronald Koeman out of St Mary’s…Liverpool defender Martin Skrtel, 31, is wanted by at least two Turkish clubs this summer, including title-winners Besiktas…Chelsea are preparing an offer for Lazio’s Italian international winger Antonio Candreva, 29…Barcelona have joined Chelsea and Manchester City in the race to sign 21-year-old Atletico Madrid defender Jose Gimenez…Manchester City captain Vincent Kompany, 30, has been assured of his Manchester City future – despite manager Pep Guardiola targeting central defenders Aymeric Laporte, 22, of Athletic Bilbao and Everton’s John Stones, 22…Stoke have won the race to sign £10m-rated Norwich winger Nathan Redmond, 22, who is refusing to sign a new contract at Carrow Road…Sunderland have lodged an £11m bid for West Ham striker Diafra Sakho, 26…Wolfsburg left-back Ricardo Rodriguez, 23, has claimed he would be excited to unite with international team-mate Granit Xhaka at club level amid reports he could be bound for Arsenal.