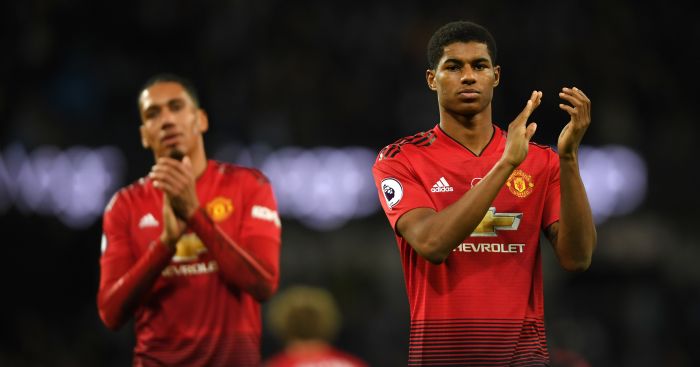 MILAN MIRACLE
“Ibrahimovic will not return to Milan,” said club director Leonardo earlier this week. “He gave his word to the LA Galaxy that he’d renew his contract. It would’ve been a marvellous story and a strong signal, but it will not be possible.”

Why is this relevant to a Premier League transfer gossip column? Well, AC Milan need to source alternative striker targets. And according to Gazzetta dello Sport, they have done just that. A new shortlist is headed by the 35-year-old Fabio Quagliarella and former Milan favourite Alexandre Pato, but a couple of more familiar strikers are included too.

The names of Marcus Rashford and Divock Origi receive only a passing mention on the front page of the newspaper, but they are there in black and white and numerous other funky colours that Italian papers use.

Neither are particularly likely. Rashford is contracted to Manchester United until 2020, will be reluctant to leave his boyhood club to move abroad, and would cost a bloody load. Origi is a little more possible, but Liverpool wanted £27m for him in the summer – and that was before he started reminding people he exists.

All in all, Milan are almost certain to go for the much cheaper option if they are so determined to strengthen their attacking ranks in January. And the Premier League is never the cheap option.

THE LAST DEFENDER
‘Exclusivo!’ screams the headline from FOX Sports, reminding us to Google Translate their article. Cheers, guys.

We are glad we did. If we hadn’t, we would never have learned that Bordeaux defender Pablo ‘is being sought by teams from the Premier League’. And that Manchester United are very much among them.

The Brazilian has recently ‘entered the radar of Jose Mourinho, who sought information about the player last week’. The reports would have been fairly positive about a 27-year-old centre-half who received his first of two international caps in October. He seems like a suitable defensive target if United continue to operate on a budget.

But FOX do have some vaguely bad news. Pablo’s contract with Bordeaux runs to 2021, and ‘does not provide for the payment of a termination fine for clubs interested in getting him out of France.’ So he has no release clause. And ‘it is expected that only European teams with high investment power will be able to negotiate with the French to hire Pablo.’

So United are probably ruled out then. Great stuff.

AND THE REST
Manchester City and Belgium centre-back Vincent Kompany, 32, is a target for Barcelona… Chelsea want to sign Napoli’s Albania right-back Elseid Hysaj, 24… Newcastle are ready to move for Benfica’s Andreas Samaris when the transfer window reopens. The 29-year-old Greece midfielder was a summer target… Real Valladolid’s Spanish defender Fernando Calero, 23, is wanted by Arsenal… Tottenham have set their sights on Real Madrid’s Spain forward Marco Asensio, 22… Chelsea have weighed up a move for Barcelona’s ex-Manchester City midfielder Denis Suarez, 24, as they prepare to let Spain playmaker Cesc Fabregas leave… Leicester City are not planning to sign any new players in the January transfer window, with manager Claude Puel happy with the squad… Puel will sanction the departure of midfielder Adrien Silva, 29… Wolverhampton Wanderers’ £20m approach for Japan midfielder Shoya Nakajima, 24, has not yet been successful, according to the vice-president of Portuguese club Portimonense.