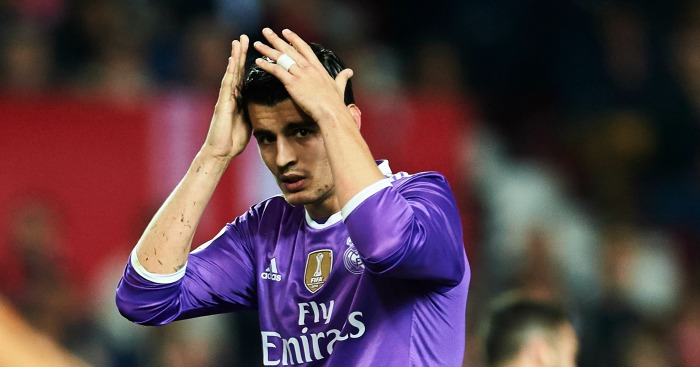 SOME MORE MORATA GUFF
Oh good. No sooner had Cristiano Ronaldo and David de Gea been ruled out as potential summer sagas between Manchester United and Real Madrid, making us all breath a blessed sigh of relief, then Alvaro Morata became one. This one’s going to run and run, and makes us very sad.

Morata had been rumoured to be available for a fee of around £65m – still an awful lot of money – but Wednesday brings news that Real have moved the goalposts again. The Mirror pass on reports from Spain which claim that the asking price is now £80m. That’s way too much money – know when to walk away and move on to other targets.

The other update is around 427 times worse, and that’s that Morata has left his honeymoon in order to speed up a move to United. It’s a ballsy move. They have the internet in Ibiza.

What’s more, Florentino Perez spoke out about the deal on Tuesday. When will this end?

MAN UNITED WANT…DE ROON?
We heard this rumour yesterday afternoon, but a) we thankfully only do a gossip column once a day and b) we’ve only just stopped laughing for long enough to type. Having missed out on Eric Dier and not fancying Fabinho, Manchester United are now targeting Middlesbrough midfielder Marten de Roon.

An update comes from Paul Fraser in the Northern Echo, giving Middlesbrough’s side of the story. He writes that Middlesbrough don’t want to lose De Roon, but will presumably realise that keeping hold of him after relegation will be a difficult business.

It’s not quite clear how far up Mourinho’s list of possible central midfield signings De Roon is, but the answer should be somewhere close to ‘pretty bloody low down’.

MILAN WANT KOSCIELNY
Just what Arsenal need, this. With the futures of Alexis Sanchez and Hector Bellerin not yet secure and Alex Oxlade-Chamberlain potentially leaving in a ‘remarkable coup’, reports in France say that Milan are flexing their financial muscles by considering an approach for Laurent Koscielny. Because if there was one member of their back five that Arsenal really don’t want to lose.

The Metro add Manchester City, Marseille and a host of Chinese clubs (we love how they aren’t even named but collated into one mush) have also been linked to Koscielny, but this is the first we’ve heard of Manchester City. Not gonna happen, that one.

Listen, Koscielny might be 31 but he has three years left on his Arsenal contract. If he leaves, it will be for all the money.

AND THE REST
John Terry is ready to sign for Aston Villa when his Chelsea contract expires at the weekend… Bournemouth are confident of sealing a £20m deal for Chelsea defender Nathan Ake… Everton are close to signing Burnley defender Michael Keane, and could complete the deal “in the next few days”… Burnley striker Andre Gray wants a new contract at the club worth around £100,000 a week.