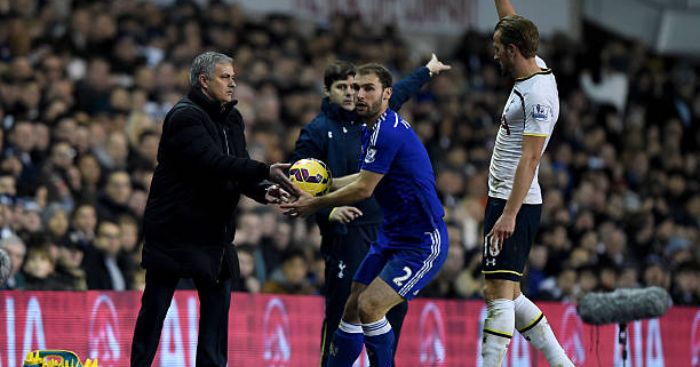 KANE YOU BELIEVE IT?
The exciting thing about managerial changes is the new impetus for transfer speculation. And by ‘exciting’, we do indeed mean ‘predictable’ and ‘often laborious’.

But the refreshing aspect of Tottenham replacing Mauricio Pochettino with Jose Mourinho in the early hours of Wednesday morning is that there are no ‘warchests’, no ‘wishlists’ and no ‘demands’ quite yet. The January transfer window is a mere two months away and we have no idea who the Portuguese will want to bring in.

There are crumbs of information lying around, such as Jason Burt’s musings for the Daily Telegraph. He says numerous Tottenham players will have choices to make, and that ‘the biggest decision may rest with the future of Harry Kane’.

The 26-year-old ‘appears unsettled and unsure of his own future’ and Burt suggest Spurs ‘could sacrifice’ him ‘if they want to re-build a squad desperately in need of an overhaul’. And he isn’t particularly wrong: a mooted fee of around £200m would fund moves for Nemanja Matic, Ricardo Carvalho and Maniche with plenty of change left over.

DAYOT THE DEAD
Who will Mourinho sign with all the money Daniel Levy will definitely give him this winter? The Daily Express have a vague idea. They have published a ‘how they could look’ feature – you know, the sort the Manchester Evening News invented – and it is actually quite tame.

There are only two new players included: long-term target Hakim Ziyech of Ajax, and centre-half Dayot Upamecano of RB Leipzig. He ‘has caught the eye of Spurs after they missed out on William Saliba’ to Arsenal, and Mourinho’s appointment makes it ‘likely they will reignite their interest’.

FAMOUS FIVE
And then there’s The Sun, who go all out with five players Mourinho ‘could target’ in January. That’s more like it. And a very quick turnaround. Well played.

Paulo Dybala is a tame start. Bruno Fernandes is similarly unimaginative; is this just a list of players Tottenham have wanted before? But then we get to number three: Kalidou Koulibaly.

The Napoli centre-half apparently ‘could be available for a reasonable fee’, which will be news to every elite club around Europe. And probably Aurelio de Laurentiis, who makes Levy seem positively docile.

Next is…wait, Declan Rice? West Ham’s Declan Rice? A player who ‘may decide the time is right to leave West Ham after their misfortunes under Manuel Pellegrini this season’? That one? Really?

Finally, you know how Mourinho ‘loves to have reliable full-backs who can make an impact in both boxes’? As if that is unique to him and every other manager likes their left-back to be erratic and terrible in defence? Well Youcef Atal of Nice could be the man.

The 23-year-old ‘is rated so highly that his French club could demand as much as £35m for his signature’. And Mourinho, sh*thouse that he is, ‘could be especially keen to move for Atal knowing that former club Chelsea are also reportedly interested’.

AND THE REST
Manchester City have opened talks over a new contract with England international forward Raheem Sterling, 24… Bayern Munich are monitoring the progress of 17-year-old Tottenham and Republic or Ireland forward Troy Parrott… Manchester United could have to pay up to £85m to sign Red Bull Salzburg’s Norway striker Erling Braut Haaland, 19… Swansea City and Stoke City want Celtic’s 32-year-old Republic or Ireland winger Jonny Hayes when his contract comes to an end.