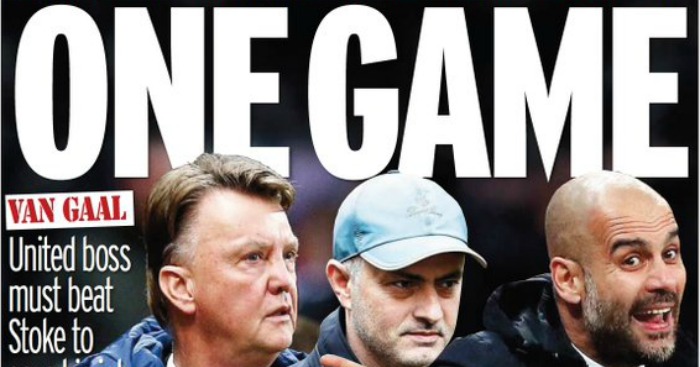 EXCLUSIVES, EXCLUSIVES EVERYWHERE
One game, two games, a lot of capital letters and Jose Mourinho. There is little agreement from the Monday newspapers on the future of Louis van Gaal, although they do all share one thing in common; each are claiming big juicy EXCLUSIVEs.

We start with the Daily Mirror, whose man David McDonnell claims that Van Gaal has ONE game to save his Manchester United career. McDonnell adds that the United board want to stick with the Dutchman, but they privately (not so privately, it seems) admit that a fourth consecutive loss when they visit Stoke on Boxing Day would render his position as ‘untenable’.

The Daily Mail echo such thoughts, with Ian Ladyman writing: ‘Van Gaal will in all likelihood be sacked if United fail to get anything from Stoke City on Boxing Day and could even go before then.’ The Daily Express fail to really commit to anything, as they claim: ‘It now looks a question of when, rather than if, Louis van Gaal is ushered into early retirement.’ That fence looks rather comfortable, gents.

The Independent are next, with their EXCLUSIVE from Mark Ogden claiming that Van Gaal will face the sack if he loses to either Stoke on Boxing Day or Chelsea on December 28. Jamie Jackson of The Guardian is in agreement. The Times claim that Van Gaal will be axed only if United lose both those two games.

Last up is The Sun, with Neil Custis saying that Van Gaal could be gone even before the game against Stoke on Saturday. In his EXCLUSIVE, Custis adds that Jose Mourinho has held talks with United. Said EXCLUSIVE is shared by the Mirror, the Mail, the Guardian, the Independent, the Times, the Star and the Express. That source close to Mourinho needs to be careful who he speaks to.

PELLEGRINI TO THE BRIDGE
Slightly smaller managerial news, but still pretty substantial. According to Fox Sports, Manuel Pellegrini is being lined up to replace Mourinho permanently at Chelsea.

Duncan Castles is the man with the news, and he claims that Chelsea are keen on Pellegrini, with the current Manchester City boss likely to be replaced by Pep Guardiola in the summer. As a result, the Blues would have to pay no compensation for the Chilean.

Technical director Michael Emenalo appears to be the main man backing Pellegrini’s appointment at Stamford Bridge. Emenalo championed Pellegrini’s cause before Mourinho was appointed Chelsea manager initially for his second spell in 2013, and he is a fan of the ‘calm and unfussy style’ of the Man City boss.

According to French outlet Le10 Sport, United are willing to bid £29million to land the winger in January. Mahrez, who was signed for around £400,000 in January 2014, has scored 13 goals and provided seven assists in the Premier League so far this season for the table-topping Foxes.

The Daily Express claim that this news will ‘rock Arsenal’. Quite.

AND THE REST
Southampton enforcer Victor Wanyama is the priority for Arsenal boss Arsene Wenger in the transfer window…Sunderland boss Sam Allardyce will try to sell Jeremain Lens when the transfer window opens in January…Chelsea’s Colombia striker Radamel Falcao wants talks with new manager Guus Hiddink to find out if he has a future at Stamford Bridge…Guus Hiddink, in charge on a temporary basis until the end of the season, wants former Chelsea striker Didier Drogba to be part of his coaching staff at Stamford Bridge…Drogba is being groomed as a future Chelsea manager with Roman Abramovich keen to bring the 37-year-old back to the club…Manchester City’s Spanish midfielder David Silva, 29, wants to see out the final three-and-a-half years of his contract…Sheffield Wednesday are plotting a sensational move for jobless Emmanuel Adebayor.