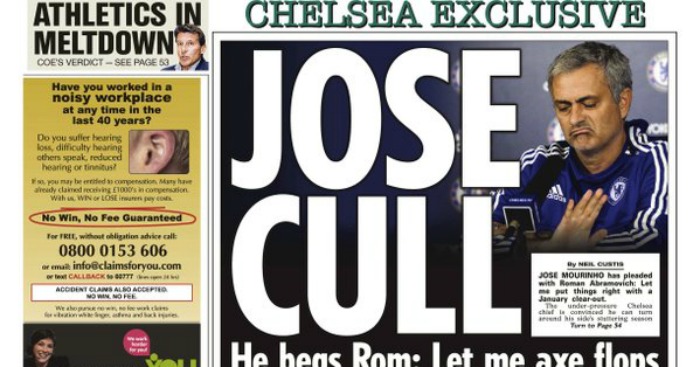 MOURINHO WANTS JANUARY CULL
Jose Mourinho is to seek time at Chelsea by pleading with owner Roman Abramovich to allow him to oversee a clearout of under-performers at Stamford Bridge, reports The Sun. We presume Mourinho himself is included in the culled group.

This comes straight from a Neil Custis exclusive, with The Sun’s man reporting that despite suffering a seventh Premier League loss in 12 at the weekend, Mourinho still does not feel it is the time to go, and the Portuguese reckons that if he manages to clear out his squad’s ‘bad apples’ in January, he can turn things around.

A ‘source’ told The Sun: “He wants to get to the January transfer window to remove the players he considers to be bad apples in the squad and get the club moving in the right direction again.”

The ‘source’ added: “Jose does not want deadlines put on him for improvement but Roman has told Mourinho he needs to see signs of an upturn.”

The thing is, who could Mourinho possibly have identified as a troublemaker in the squad? Cesc Fabregas has been reported as the ring-leader of the dissenters in recent times and although Mourinho has dropped him recently, only four players have enjoyed more minutes. Diego Costa and Eden Hazard are horribly under-performing but a January sale of either demands they be replaced, while Branislav Ivanovic is an obvious Mourinho favourite. Pedro? Oscar? Ramires? Hell, is it Kenedy? Who knows.

WILLIAN WANTED BY BAYERN
Or could it be Willian? Considering he has been perhaps the only Chelsea player who has performed to a consistently excellent standard, surely not.

MONK ON HIS WAY OUT
John Cross should have stuck to his guns.

The Daily Mirror’s man reported last month that Garry Monk was in danger of losing his job at Swansea after missing a couple of training sessions, with the Welsh side in more than questionable form. A 2-1 win over Aston Villa followed, but 3-0 and 1-0 defeats to Arsenal and Norwich leave Swansea with one win in nine games in competitions – including scoring just five goals in that sequence – and in 14th in the Premier League table, just five points clear of the relegation zone.

Cross’ Mirror colleague David Anderson has just fired up the pressure machine once more on the 36-year-old, particularly with an opening paragraph like: ‘Garry Monk is set to be fired as Swansea manager.’

It is very much what Cross had written less than a month ago before quickly deleting his article. The Swansea hierarchy are keen to install a Director of Football or similar authority figure above Monk to assist him, but the manager refused. Swansea feel Monk’s lack of experience, having been appointed by the club for his first managerial post last February, is costing them, and according to Anderson, Monk’s replacement is already being sourced.

IBRAHIMOVIC TO UNITED
Oh, bother. Fichajes.net are reporting that Manchester United will consider a move for PSG striker Zlatan Ibrahimovic after the Red Devils were rejected in their quest to sign Cristiano Ronaldo.

Of course, all this won’t stop The Metro et al. inevitably picking up the rumour and reporting on it pretending that there is even a semblance of credibility there. Football gossip, ladies and gentlemen.

AND THE REST
Mourinho could yet keep his job for the rest of the season, but Diego Simeone is ready to move to Chelsea next summer…Bournemouth have agreed to fund a spending spree for manager Eddie Howe in January — financing a potential move for QPR striker Charlie Austin…Leeds United are eyeing a loan move for West Brom keeper Anders Lindegaard…Newcastle are set to send Ivan Toney to Barnsley on loan this week…West Ham forward Michail Antonio may be heading to the Championship with a transfer to Derby County.