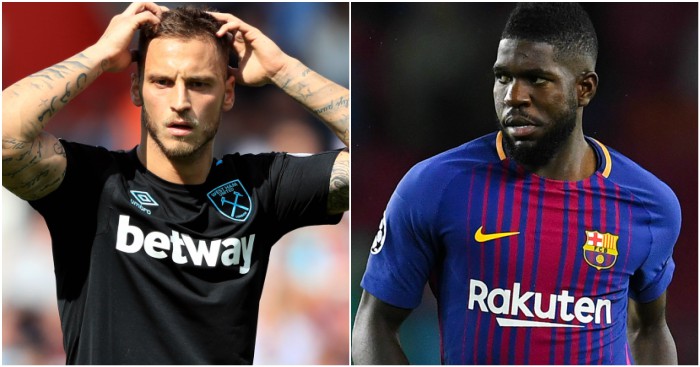 MOYES MAKING PLANS
David Moyes could get rid of Marko Arnautovic in January, just half a season after the winger joined West Ham.

The Mirror says Moyes has been given free rein to axe whoever he wants and Arnautovic is the obvious headline-grabber given how wretched he has been since moving from Stoke for £25million in the summer.

The story also says Moyes wants to strengthen in midfield and defence, with Bournemouth’s Harry Arter mentioned as target. The club could also revisit a move for Sporting Lisbon star William Carvalho, though you would imagine that the Portugal international has seen enough over the last couple of months to want to give the Hammers the widest berth.

Moyes, of course, is also after one of his old boys. This time, rather than Darron Gibson or Steven Pienaar, it’s Lamine Kone, who is still living off a decent half-season at Sunderland before Moyes even arrived.

MOURINHO TEMPTED BY BARCA CENTRE-BACK
Jose Mourinho is said to have heard the value of Samuel Umtiti’s release clause and thought: “I’ll have a bit of that.”

Manchester United, or anyone else for that matter, could get the Barcelona defender out of his contract at the Nou Camp for £53million, which the Daily Mail says is “enticing value” to Mourinho.

The United boss, who has supposedly been told he has to sell before he buys anyone, is shopping around for another centre-half, despite spluffing over £30million on Victor Lindelof in the summer.

‘Who is he?’, you may ask. He’s a 16-year-old attacker at Benfica who has apparently been interesting Real Madrid. Sounds promising. But before United fans get too excited, the Guinean is being compared to Angel Di Maria.

Despite the supposed likeness to pea-hearted Di Maria, Record claims United have sealed a deal for Embalo to move to Old Trafford.

Frank Lampard has refused to rule out the possibility of replacing Michael Emenalo at Chelsea…PSG want Chelsea boss Antonio Conte to be their next manager…Sergio Aguero says next season will be his last at Man City but the club claim he’s staying until 2020…Stoke chairman Peter Coates expects Peter Crouch to be offered a new contract…Kevin Mirallas will decide on his Everton future after the club appoint a new manager…Sam Allardyce is interested in becoming the next USA coach…Javier Mascherano wants to leave Barcelona and return to River Plate…Germany chief Oliver Bierhoff has let slip that Liverpool target Leon Goretzka is off to the Premier League…Sergio Ramos has suggested some Real Madrid players aren’t fans of Cristiano Ronaldo’s attitude on the pitch.