Home All The News Gossip: New suitor for Evans, Juve back off Bellerin 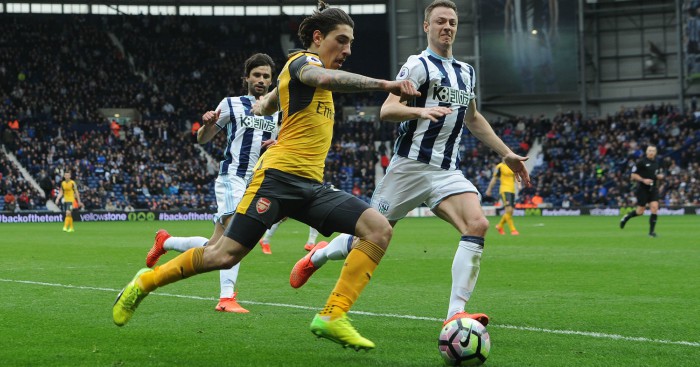 SPURS IDENTIFY CUT-PRICE ALDERWEIRELD REPLACEMENT
Jonny Evans is available for £3million this summer when West Brom are relegated and the queue is already starting to form.

Manchester City were interested in the former Man Utd defender before they spluffed the best part of £60million on Aymeric Laporte, while Arsenal are still said to retain an interest. Now, according to The Telegraph, Tottenham are the latest big-hitters to sniff out a bargain.

With doubts lingering over Toby Alderweireld’s future, Spurs are making contingency plans, with the prospect of losing the Belgium defender this summer for around £40million far more palatable than watching him walk away next year for £15million less.

The story also suggests Man Utd could look at bringing Evans back which seems to make sense for all concerned. But it’s likely they’d prefer to overpay for a bigger name for all those lovely shares and likes.

JUVE SWERVE BELLERIN TO TARGET MAN UTD DEFENDER
It was reported that Juventus were putting a package together to sign Hector Bellerin. Well, according to Goal, they’ve canned that idea…

The Old Lady has crunched the numbers and decided Matteo Darmian is a better deal. Juve have been linked with the Man Utd defender for most of the last year, and with the Italy international having made only 13 appearances this term, he would certainly come cheaper than Bellerin.

The Arsenal defender is under contract until 2023 having signed new terms when he was rated as one of the best full-backs in the game. Barcelona and Manchester City both fancied the Spain international, but since agreeing a new deal, the 23-year-old’s status has fallen.

So Juve will look instead to Darmain, who would doubtless jump at the chance to return to Serie A after three seasons at Old Trafford.

ALLEGRI IN THE FRAME FOR PSG
Darmain shouldn’t take it personally if, as he goes through the entrance at Juventus Stadium, coach Massimiliano Allegri walks through the exit.

That’s because, according to ESPN, PSG have become quite taken with the Juve manager. Mauricio Pochettino and Antonio Conte were reported to be their primary targets, but Juventus’ Champions League exploits have made PSG chiefs wonder what the former AC Milan coach could do with their expensively-assembled squad.

PSG face a dilemma. Pochettino is said to represent the best bet in the long-term as the club looks to restructure from top to bottom. But Allegri is seen as the best candidate to make an instant impact.

AND THE REST
Former Arsenal star Alexander Hleb will retire at the end of the season after re-joining BATE Borisov for his fifth spell…Jose Mourinho is facing a serious battle to revitalise his star signings Alexis Sanchez and Paul Pogba amid growing concerns about their state of mind…Pogba is set to be dropped for France’s friendly against Colombia in the latest blow for the midfielder…Gareth Southgate is set to snub Harry Kane by making Jordan Henderson England’s World Cup captain…Atletico Madrid forward Antoine Griezmann wants his future resolved before the World Cup…Zlatan Ibrahimovic will sign a deal worth $1.5m (£1m) with LA Galaxy until the end of the 2019 season…Former Swansea boss Paul Clement will become the new Reading manager.