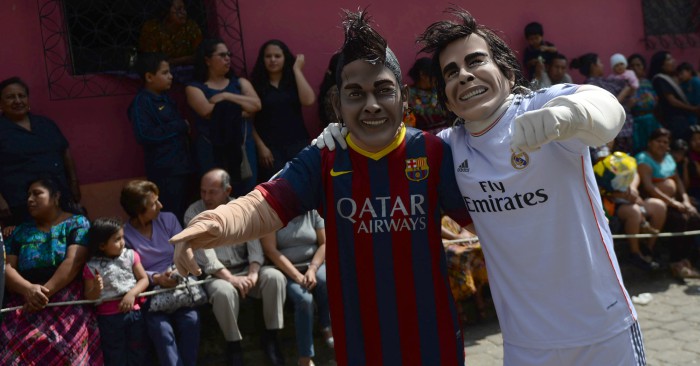 NEYMAR TO MANCHESTER?
The translated headline is ‘Neymar does not rule out going to Manchester City’ and it is hardly a surprise; why would he rule out Manchester City when they are one of the richest clubs in the world and they are about to win the Champions League? Mundo Deportivo do say that Real Madrid are still ‘in the pole’ – with a view to a 2019 transfer – but that the Brazilian is intrigued by the Premier League and the chance to work with Pep Guardiola.

As the report continues: ‘Without forgetting the other team of Manchester, United, who has just seen how Zlatan Ibrahimovic leaves and has been ‘orphan’ of a great star that could well be Neymar.’ It could. But it seems more likely that such talk is being used to hurry Real Madrid along.

BALE OUT TO MAN UNITED…
Yes, we have heard this an awful lot but at the moment Gareth Bale is not playing enough in the biggest games to be happy at Real Madrid; he was on the bench for both Champions League last-16 clashes with PSG. His teammates apparently believe that if Zinedine Zidane stays, Bale will leave.

The obvious destination is of course Manchester United and, well, we already know that Zlatan has left ‘and has been ‘orphan’ of a great star’. The price would be over £90m and United would have to make Bale their highest-paid star.

DOUGLAS COSTA TO MAN UNITED?
‘Manchester United are weighing up a £40million summer swoop for Brazil star Douglas Costa,’ according to the Mirror. But we remember that Jose Mourinho wants no more attacking players this summer so we are left feeling a little confused.

Costa has been on loan at Juventus this season and the Italian club has an option to buy the Brazilian, but Manchester United ‘received sufficient encouragement following an initial enquiry about the potential availability of the player’.

AND THE REST
Fulham’s 17-year-old winger Ryan Sessegnon could reject moves to big Premier League clubs if they gain promotion from the Championship this season…West Ham forward Manuel Lanzini has played down a move away from the club by saying he is “very happy” with the London Stadium team.