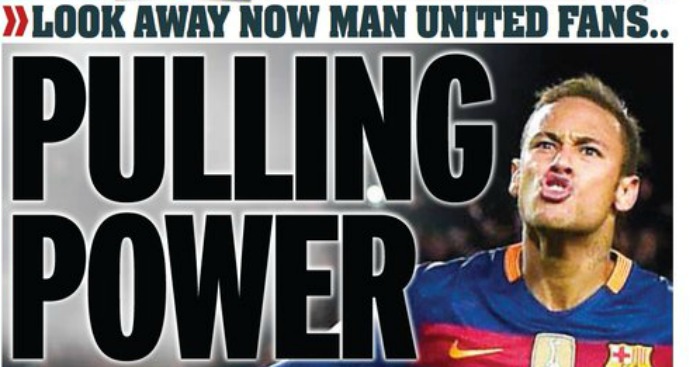 NEYMAR. AGAIN
It’s only February 6, and the ‘Neymar to…’ transfer rumours are already frustratingly boring. Tuesday brought reports that Manchester City were interested. By Thursday, neighbours Manchester United had been linked. By Friday, United were confirmed to have made a bid for the Barcelona forward.

Well, now we’ve come full circle. It’s Saturday morning, and the Daily Mirror have an exclusive. They report: ‘Manchester City can make £145 MILLION Neymar the first big signing of Pep Guardiola’s reign.’ They certainly can – £145million would match Neymar’s release clause, after all – but they probably won’t.

David McDonnell, who wrote the story, seems to know it too. The claim comes from Neymar’s countryman Ronaldinho, who says: “Neymar has already stated his desire to play for Pep. That was a big statement with most people knowing that Pep would be joining Manchester City in the summer. We know they can pay wages that no other club in Europe has the power to do.”

The 35-year-old free agent adds: “I will advise him to stay at Barcelona for at least a few more years, but if he wants City and they want him, we know they have the power to make it happen.” So he’s staying at Barca, then?

The revelation here appears to be that Manchester City have a lot of money. Colour us shocked.

STOKED
If you’re bored of reading about Neymar, how about an update on the future of Saido Berahino? It’s been at least one day since the last one, folks.

This comes from The Sun, whose man Graham Hill reports that Stoke ‘are preparing a fresh bid’ for the West Brom striker in January. The Potters, along with Tottenham and Newcastle, were one of the clubs most heavily linked with the forward in the winter transfer window.

Hill adds that any future deal could hinge on the future of Marko Arnautovic, who has a £12.5million buyout clause in his Britannia Stadium contract.

GRANIT CITY
Granit Xhaka really wants to join the Premier League. The Borussia Monchengladbach midfielder does not try and hide this fact; he positively revels in it.

Having been linked with Arsenal and Liverpool in recent times, the 23-year-old has hinted further towards an eventual move, saying: “England is my dream. I do not hide it. Whether I’ll be happy there, only the good Lord knows.”

On January 20, Xhaka said: “I have a childhood dream and that is the Premier League. No matter if I play a second or 100 matches in England, I would one day love to fulfil that childhood dream.”

All Arsenal and Liverpool need to do now is match the demands of Gladbach director Max Eberl, who says he wants a transfer fee “which can go into levels that make you dizzy.” Some reports put Xhaka’s value at £30.5million.

NEW BARKLEY DEAL
Roberto Martinez loves Ross Barkley. Earlier this week, the Everton manager said: “Ross is not a young man any more. He’s a player you can build a project around. I’ve just seen a big, big difference this season in Ross. He’s showing he has the confidence he needs.”

But with Barkley linked with a move to Manchester City this summer, should Everton be worried? The England international has another two-and-a-half-years remaining on his current contract at Goodison Park, and the Toffees are thought to value the midfielder as highly as around £50million. According to Martinez though, the 22-year-old isn’t going anywhere.

“Not now, but maybe in the summer,” Martinez replied when asked if Barkley was in line for a new deal. The Daily Mail, The Guardian and many more report that an offer will be forthcoming in a matter of months.

AND THE REST
Chelsea have held talks with Italy coach Antonio Conte, 46, as they look for a successor to interim boss Guus Hiddink…Hiddink has described reports linking Chinese club Jiangsu Suning with a £75m move for midfielder Oscar, 24, as pure speculation…Blues captain John Terry, 35, believes the club should offer him a new deal even though they have no permanent manager in place…Wealthy figures in China want Mourinho, 53, to help the country become a superpower in football…Watford’s Nigerian striker Odion Ighalo, 26, says he rejected a move to China because “God said it was not for me”…The agent of Juventus forward Simone Zaza, 24, has denied claims his client almost joined Crystal Palace in January.