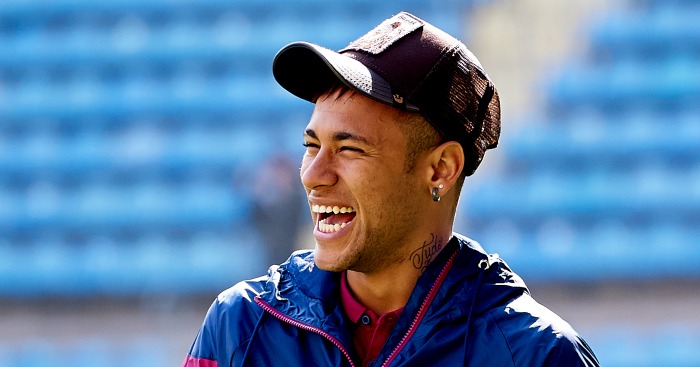 NO MORE NEYMAR
Barcelona are in a spot of bother. They remain without a shirt sponsor ahead of the new season, are already struggling with large debts, and are seeking to extend the contracts of their three best players, Lionel Messi, Luis Suarez and Neymar. The third in that fearsome triumvirate is proving to be quite the problem.

According to The Sun, Barcelona are preparing for Neymar’s exit. The club are keen to keep the Brazilian forward, while Neymar himself wants to stay, but he is seeking an improvement on his current terms which see him earn around £77,000 a week. Jonjo Shelvey earns nearly £50,000 more.

Barcelona are reluctant to meet Neymar’s current demands, as they fear it could ‘cripple the club financially’. The Catalan press has recently started a campaign against the 24-year-old, something Spanish football ‘expert’ Guillem Balague says Barcelona are privately fine with. Ah, posturing.

With all the commotion, Manchester United are circling. The club are willing to pay £300,000 a week to persuade Neymar to move to Old Trafford – although his £144million buy-out clause must surely be met, if not something close to it.

In the penultimate paragraph of their story, The Sun present a rather important caveat: Neymar will only join a club in the Champions League. So United, two points behind fourth-placed Manchester City with an inferior goal difference, must qualify for Europe’s premier competition first. If not, this whole thing is pointless. Delightful.

Reports broke in February that Neymar had either signed or agreed a new deal at Camp Nou, with manager Luis Enrique and assorted club staff assuring that the Brazilian will stay at the club. Regardless, his current deal still has two years remaining. The odds are he will still be a Barcelona player then.

Lyon forward Lacazette has endured a mixed season in Ligue Un after an excellent 2014/15 campaign, but has still scored 19 goals in 39 games in France. According to French daily L’Equipe, United have an interest in the 24-year-old.

As good as Marcus Rashford is and, indeed, can be, Lacazette comes with just as much pace and finishing ability, but marries that with experience and more pedigree. The striker is capped by France, and has 72 goals in 134 games across his last three seasons.

United are not the only club circling the forward. Tottenham and West Ham are also credited with an interest. With Lyon currently residing in a Champions League qualification spot in France, only one of those clubs looks a likely destination if he is to leave this summer. And would Lacazette be happy playing second fiddle to Harry Kane?

OX NEWS
It has not gone well for Alex Oxlade-Chamberlain. Once the Next Big Thing, the Arsenal midfielder/winger/forward is being ‘shipped out’ of the club this summer. Alex Iwobi has shown you up, fella.

Darren Lewis of the Daily Mirror recycles news from a few weeks ago to tell us that West Ham are his most suitors. Arsenal have ‘offered’ their London rivals the opportunity to sign Oxlade-Chamberlain.

Arsene Wenger is ‘poised to stage a clear-out’ at Arsenal this summer, and Oxlade-Chamberlain’s availability ‘is sure to spark a scramble for his services’. Who wants a 22-year-old forward with 14 goals in 149 Arsenal appearances? Don’t all speak at once.

AND THE REST
Newcastle boss Rafael Benitez has refused to rule out staying on at the club next season – even if they are playing in the Championship…Chelsea fear they will lose highly-rated teenager Dominic Solanke after the 18-year-old rejected a new contract offer…Tottenham chairman Daniel Levy is facing a difficult summer of trying to control his wage bill, with Spurs players and agents likely to demand pay rises for finishing in the top four in the Premier League…Caretaker manager Eric Black has made it clear that he does not want the Aston Villa manager’s job on a permanent basis…Keeping Watford in the Premier League and winning the FA Cup may not be enough for Quique Sanchez Flores to keep his job.