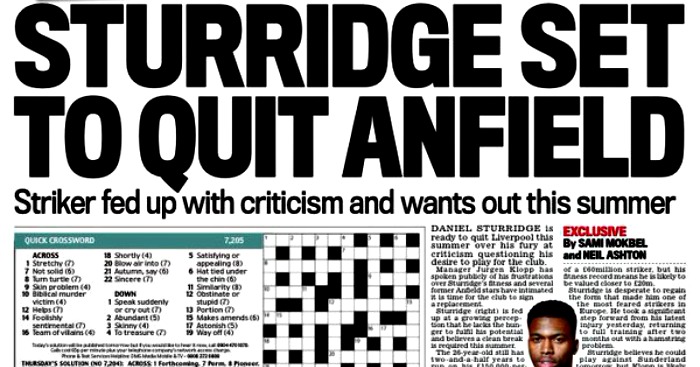 NEYM YOUR PRICE
After The Sun brought us news of Neymar’s father revealing the Brazilian ‘could quit Barcelona’ (he really didn’t) on Thursday, we have an update. The club who bid £146million for him last summer has been REVEALED.

And it actually has, too. No ‘sources’, no ‘according tos’, just bonafide, actual quotes from an involved party. Neymar Snr told Spanish radio station COPE on Thursday: “Manchester United is the side that offered €190m for Neymar.” Wowzers.

“He has still two years left on his contract but you can all be calm as my son is so happy here,” his father added. Ah, so he isn’t leaving then? Glad that’s all cleared up.

STURRING THE POT
Time for a game of spot the difference.

Exhibit A: ‘Daniel Sturridge is ready to quit Liverpool this summer.’

Exhibit B: ‘Daniel Sturridge is ready to quit Liverpool this summer over his fury at criticism questioning his desire to play for the club.’

Basically, Sturridge’s representatives have been chatting with some #topjournos. The stories hinge on the 26-year-old wishing to ‘get back to his best at club level and for England’ in the words of Cross. The Mail add that Sturridge is ‘furious’ at ‘criticism questioning his desire to play for the club’. Jurgen Klopp’s frustration with the striker’s injury issues and desire to play have been well-documented, but it now seems that the Liverpool man has had enough. Cross adds: ‘Klopp’s remarks about Sturridge’s fitness are affecting the striker when no-one is more desperate to play than him.’

So where next? The Mirror links Arsenal (oh, Crossy), Tottenham, West Ham and Chelsea with an interest. Only Spurs seems plausible really, and that’s quite a long shot. The Daily Star decide to add Manchester United to the equation in their report, because why not?

Oh, and this whole ‘set to quit’ thing: players do not decide whether they leave their club or not. Contracts still exist. Just ask Saido Berahino.

GREAT HAUL OF CHINA
Credit to The Sun for that headline.

Football has gone mad, and it’s all thanks to our new Chinese overlords.

After making Ramires the most expensive January transfer window signing last month, and with footballing stalwarts such as Jackson Martinez, Gervinho, Demba Ba and Paulinho having since travelled to the Far East, China’s search for world domination clearly knows no bounds. Even Alex Teixeira has been tempted by a veritable f**kload of cash.

Next on the radar for the Chinese Super League is another Chelsea midfielder: Oscar. Chinese football clearly loves players with excellent stamina. According to Antony Kastrinakis’s exclusive, Jiangsu Suning had a £57.5million offer for the Brazilian rejected last month. Jason Burt of the Daily Telegraph believes that the offer was actually £75million, and that Yaya Toure will also be targeted by the Chinese Super League in the summer.

AND THE REST
Atletico Madrid want to sign Chelsea striker Diego Costa, 27, this summer to ensure manager Diego Simeone stays at the club and does not consider a move to Stamford Bridge…Former Chelsea manager Jose Mourinho, 53, has signed an agreement with Manchester United to become their next boss…Gary Neville, 40, will see out the season in charge of Valencia but the Spanish club have sounded out their former boss Rafael Benitez, 55, for the 2016-17 season…New York City want to sign 34-year-old goalkeeper Iker Casillas, a World Cup winner and three-time Champions League winner, from Porto this summer…Stoke could lose striker Marko Arnautovic for £12.5m this summer as the Austria international has a buy-out clause in his contract…On-loan Sunderland midfielder Yann M’Vila, 25, has hinted he would like to extend his stay on Wearside from Russia’s Rubin Kazan at the end of the season…The Premier League’s bottom side Aston Villa will have to pay winger Charles N’Zogbia, 29, an extra £1.3m after failing to offload him in January.