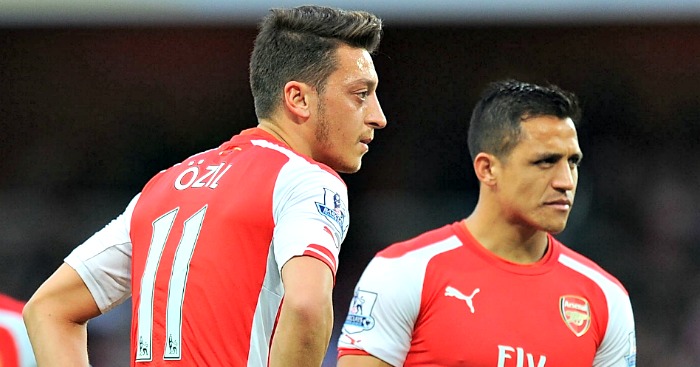 SANCHEZ AND OZIL TO SIGN NEW ARSENAL DEALS
We’re going to our old Sunday friend Steve Stammers now. Steve doesn’t always get it right in the Sunday Mirror, but he does give out some juicy lines on London clubs.

This week it’s Arsenal, and the claim that Mesut Ozil and Alexis Sanchez are about to sign new contracts that have been discussed for months.

Both Sanchez and Ozil have two years left on their current deals, but Arsenal have been trying to tie them down to extensions with the fear that elite European clubs are sniffing around.

In fairness, the story is a little bit wishy-washy. We have phrases like ‘The North London club now hope to secure the long-term futures of the pair in the near future’, ‘Mustafi’s arrival could be a factor in Ozil deciding to add three more years’ and ‘given Arsenal optimism’.

Don’t celebrate until the ink is on the paper.

IBRAHIMOVIC AND LINGARD TO GET NEW DEALS
Anything Arsenal can do, Manchester United can do too. Sunday also brings news of new contracts for two United players.

The first of those is Zlatan Ibrahimovic, who is reported to be signing a deal to keep him at Old Trafford for an extra year on top of his current 12-month contract.

In truth, that’s little surprise to anyone, given that Jose Mourinho said last week that Ibrahimovic was almost certain to stay beyond the first year, particularly after starting the season so impressively.

The other new deal is for Jesse Lingard, hauled off at half-time after a woeful first-half display in the Manchester derby defeat to City.

Lingard established himself in the first-team picture at United under Louis van Gaal, and was rumoured to be signing a new long-term deal before Van Gaal was sacked. A few months later, with Mourinho now installed as manager, Lingard’s four-year deal can be announced.

EVERTON TO MAKE JANUARY MOVE FOR DEENEY
We do have an actual transfer story in the gossip desert that is September. Everton will reportedly go all out to sign Troy Deeney in January.

Whenever stories like this come out days after the window has closed, it does make you wonder what the club in question was doing for the whole summer. Still, it is not for us to reason why.

In the Sunday People, Tom Hopkinson claims that Steve Walsh – who wanted Deeney when at Leicester – plans to follow up on that interest in January. Leicester bid £25m for Deeney in June, but the striker eventually signed a new contract.

With Everton losing out on plenty of players towards the end of the transfer window, you can see why they would leak good news stories to the media now.

AND THE REST
Chelsea will try to sell midfielder Cesc Fabregas when the transfer window reopens in January… Manchester City are to press ahead with plans to extend Etihad Stadium next summer to a capacity of 61,000… Uruguay defender Martin Caceres is heading to the Premier League, with West Brom, Southampton, Sunderland and Swansea all having registered an interest in the defender… Rangers fans caused extensive damage to a toilet block at the away at Celtic Park after the first Old Firm league derby in Glasgow in four years… Kyle Walker has agreed a deal to stay at Spurs.