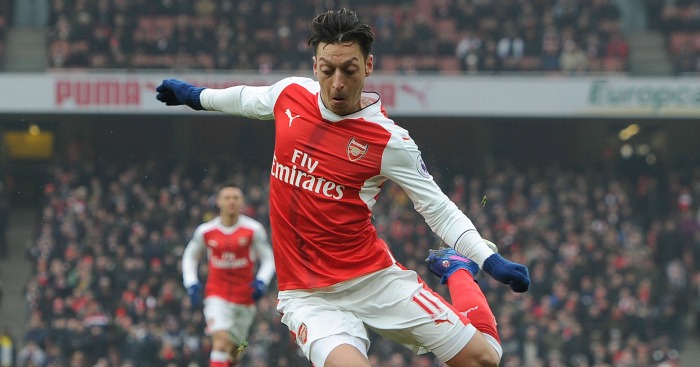 MOURINHO WANTS MESUT
As my mother would say ‘you can want all you like’ because there is literally zero chance that Arsenal would sell Mesut Ozil to Manchester United this summer. You can quote Mourinho saying Ozil is “the best No.10 in the world” and you can point to the German’s unwillingness to sign a new contract at Arsenal, but there is no chance that this incarnation of Arsenal – with no stadium to pay for – will sell a key player to a title rival.

The story came from Football London’s Arsenal correspondent, which makes you wonder how he would know what is going on at Manchester United. It’s an educated guess but this simply won’t happen.

ARSENAL TURN TO GUEYE
‘ARSENAL are eyeing Idrissa Gueye this summer – to turn him into their own N’Golo Kante,’ says The Sun, but we can’t help thinking that the Gunners would have moved for the Senegalese midfielder last summer if they were interested; after all, he was excellent even amongst the disaster of Aston Villa’s relegation season.

If Everton do sell Gueye, then they will make a hefty profit on the £7m they paid for their tackling machine.

EVERTON WANT £90M LUKAKU CLAUSE
We brought you the claims from Belgium on Monday that Romelu Lukaku was stalling over a new Everton deal because of a buy-out clause. What the Daily Telegraph now claim is that the player wants a £70m buy-out clause (which Chelsea or Manchester United might pay) but the club want to make it £90m, ensuring they get an eye-watering sum for their biggest asset. Right now there is an impasse.

AND THE REST
Bournemouth manager Eddie Howe is having second thoughts about making Jack Wilshere’s loan move from Arsenal permanent...The Cherries are planning to move again for Dutch Chelsea defender Nathan Ake...West Ham are hoping to sign Juventus striker Mario Mandzukic…Winger Stewart Downing’s future at Middlesbrough is in doubt after the 32-year-old had a training ground row with manager Aitor Karanka.