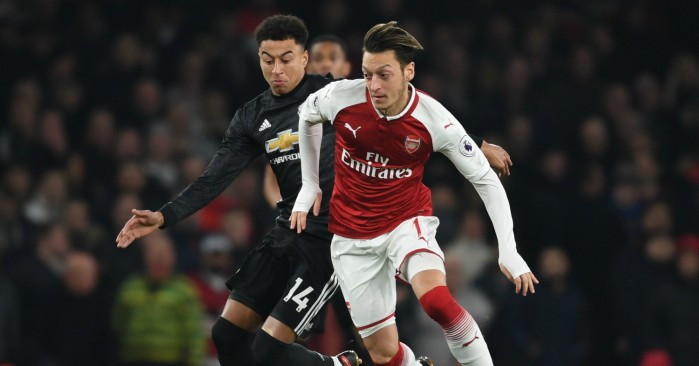 OZIL EYEING MAN UNITED
‘Mesut Ozil favours a move to Manchester United over Barcelona should he leave Arsenal in the coming months’, claims the Daily Mail, who say that the German has been ‘making it plain to friends’ that he wants a reunion with Jose Mourinho at United (who desperately need more creativity) rather than a return to Spain with Barcelona. All the talk this week was about Ozil possibly staying at Arsenal, but that seems unlikely if they miss out on the Champions League again (as looks likely after that exercise in futility against West Ham).

SHAW AND INGS TO NEWCASTLE
‘RAFA BENITEZ will be given the green light for a January spree in the next 48 hours with a Newcastle takeover moving significantly closer,’ claims the Daily Star, and chief among Rafa Benitez’s targets are Manchester United left-back Luke Shaw and Liverpool striker Danny Ings. Mike Ashley has apparently agreed to release £20m on the condition that he is reimbursed when the takeover goes through.

Ings is likely to arrive on loan, though Shaw could be a more difficult deal as he impressed for United against Bournemouth on Wednesday night. Benitez is also said to want a goalkeeper and a No. 10. So he is going to have to be awful canny with his £20m.

IF THERE’S ANY JUSTICE IN THE WORLD…
…then Michy Batshuayi will join Monaco and be absolutely brilliant, as clearly his face does not fit at Chelsea. The Belgian striker was once again on the bench on Tuesday even in the absence of Alvaro Morata, with Eden Hazard preferred as a ‘false 9’. As that clearly works, the Daily Telegraph are suggesting that Chelsea will spend £80m on Thomas Lemar (which would break their transfer record, remember), with Monaco (and Michael Emanalo) likely to ask for players to move in the opposite direction.

AND THE REST
Ronaldo is consulting his lawyers to try to lower his release clause and engineer his move away from Real Madrid…Southampton are leading the chase for Eibar striker Dani Garcia…Sporting Lisbon want to take Leicester striker Islam Slimani back to Portugal on loan…Bristol City hope to sign 20-year-old Everton midfielder Liam Walsh for £1m.