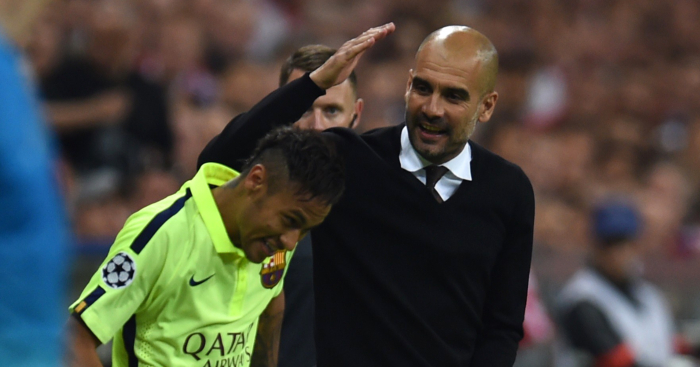 THE OLD LADY WITH PEP IN HER STEP
Journalist Luigi Guelpa was reportedly the man who broke the news that Cristiano Ronaldo would head to Juventus, and that turned out to be true, so why would we now cast any doubt over his claims that Pep Guardiola is also bound for Turin?

That’s what Guelpa has told Radio CRC, in any case, reporting that the Manchester City boss has verbally agreed a four-year deal with the Serie A giants.

If all that is required to be taken seriously is to make some predictions that turn out to be true, then allow us to try some:

THAT’S NEYMAR JR, IF YOU’RE A RIDICULOUS PEDANT
You’ve burned through two managers already this season, you’re out of contention for any silverware, and you’re even considering bringing Jose Mourinho back into the fold. How do you lift spirits and get yourself out of this tailspin?

If you’re Real Madrid, the answer is the same as it ever was: “Spend a ridiculously large amount of money on a big flashy signing to distract people from your obvious shortcomings, and hopefully stick one to Barcelona in the process.”

So of course it was only a matter of time before Los Merengues (who are bafflingly never called ‘The Eggmen’) were seriously linked with Neymar. Sport report that Real are lining up a bid of €350m (roughly £302m), which would smash the record €222m Neymar cost when he moved from Barcelona to PSG. With Kylian Mbappe on their books and FFP rules to follow, Real apparently feel that PSG would find the offer irresistible.

MONCHI BUSINESS
Arsenal have long been linked with Roma’s director of football Monchi, and that move looks all the more likely now that the Spaniard has left the Italian club.

Monchi would replace Sven Mislintat, the head of recruitment who left the Gunners last month after just 14 months in the job.