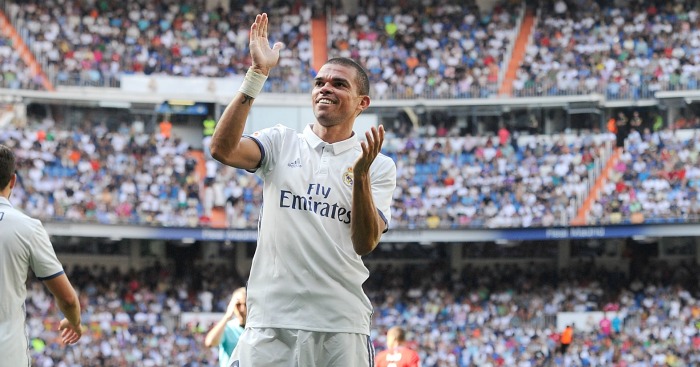 MANCHESTER UNITED IN FOR PEPE
It’s hardly any surprise that Pepe’s future is being rumoured. The defender’s contract at Real Madrid expires at the end of the current season, and a new deal has not yet been signed. Pepe would like a two-year deal, but Real are only prepared to offer a 12-month contract to a player who turns 34 in February.

The Sun report that Manchester United and Juventus are the main admirers of Pepe, although they have also mentioned Chelsea in the recent past. A move to the Premier League would surely be a gamble at the age of 34, while Serie A is a more natural fit.

Or, as is probably the most likely, Pepe eventually signs a new Real deal after the posturing from both parties.

PALACE WANT IVANOVIC
Well, this is a rumour that makes all the sense. Partly because it has come from Darren Lewis, who has plenty of contacts at London clubs. Partly because it’s Alan Pardew looking for an established name to shore up his defence. Partly because Antonio Conte clearly doesn’t want Ivanovic that much.

The Serbian did come on as a substitute for Chelsea this weekend, but has dropped down the pecking order since Conte’s arrival. Ivanovic was struggling to defend proficiently when playing as a right-back, let alone a wing-back.

Lewis says that Palace might be interested in signing Ivanovic on a free transfer next summer. Those wages will be sky high, guys.

SPURS EYE ISCO LOAN
No player has been linked more often to Tottenham in the last year than Isco. Many outlets reported that Mauricio Pochettino tried to sign the Real Madrid midfielder this summer before Moussa Sissoko eventually waltzed through the doors for a transfer fee that made everyone whistle.

Now the Daily Mirror report that Tottenham will go back in for Isco in January, but this time make a loan offer. The midfielder has still not signed a new deal at Real Madrid, and Spurs believe they can take advantage of that uncertainty.

Again, sorry to put a spanner in the works but there is a ‘but’ here. Isco has just broken back into the Real Madrid first team. With their transfer ban still hanging over the club with any appeal not yet heard, it would be risky of Madrid to let any players leave.

AND THE REST
Manchester United defender Antonio Valencia is out for six weeks after a hand operation… England goalkeeper Joe Hart says he is not focusing on returning to Manchester City whilst on loan at Torino… West Ham have joined Arsenal, Chelsea and Liverpool in the race for Argentinian forward Naza Bazan Vera. There really isn’t much about today.