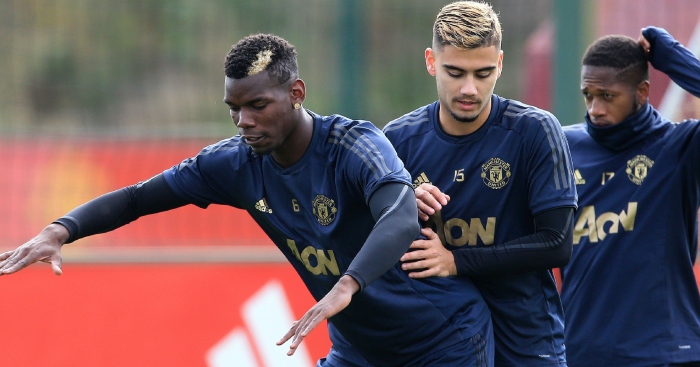 UNITED READY TO GET RID OF POGBA
It seems Paul Pogba’s plan has worked. Manchester United are finally ready to give their record signing the move he has wanted since the summer.

Pogba has looked like he has been playing for a move ever since he returned for pre-season a World Cup winner, all the while Mino Raiola was attempting to get him fixed up at Barcelona. United held their ground and Jose Mourinho even offered the midfielder an olive branch in the form of the vice-captaincy, which was quickly wrenched back when Pogba seemed to go out of his way to show that he wasn’t worthy of the role.

Mourinho has been fed up with Pogba for months but, according to the Sunday Mirror, the club have also now given up on the £89million star. The story goes that they are ready to get rid in January, most likely to Juventus, either permanently or on loan with a view to a permanent deal.

United would take a part-exchange deal, with Miralem Pjanic their preferred target, though Juve are not likely to entertain that prospect. The Red Devils might have more joy with left-back Alex Sandro.

LONDON CALLING FOR ANOTHER UNITED MIDFIELDER
Another disappointing Manchester United midfielder set to be on the move is Andreas Pereira.

The Brazilian Tom Cleverley has been waiting for his chance at United since returning from his loan spell at Valencia last season but Mourinho will say he’s had it. Pereira has played six games, three from the start, including the miserable Champions League defeat at Valencia on Wednesday and the 22-year-old has offered little evidence to suggest he can be a long-term success at United.

Pereira’s United contract expires at the end of the season but the club are likely to take the option they have of adding an extra year. The player has so far refused United’s offer of a three year extension, with Arsenal and Chelsea supposedly interested, but in the short-term, the Sunday Mirror reckons West Ham want to take him to London on loan in January.

PULISIC DEAL MEANS CHELSEA EXIT FOR WINGER
Chelsea’s more immediate priority is Christian Pulisic. The Blues want to secure a summer deal for the Borussia Dortmund winger and they want it wrapped up as soon as possible.

The Daily Mail seem very certain that Chelsea will land the USA star though their story admits that a fee is yet to be agreed.

Pulisic has been quite open about his willingness to move to the Premier League, though it was thought that Liverpool was his preferred destination. However, this latest report suggests the 20-year-old has indicated that he is also keen on Stamford Bridge.

The arrival of Pulisic would suggest Callum Hudson-Odoi’s days are numbered at Chelsea.

Bayern Munich, RB Leipzig and Monaco are all sniffing around the 18-year-old, though the Blues are reluctant to see the academy graduate depart.