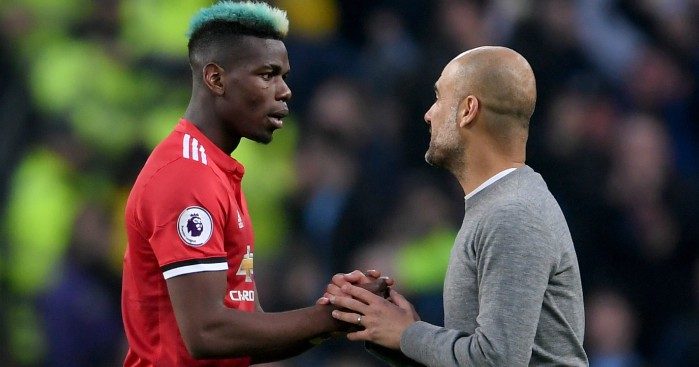 POGBA AND HIS AGENT TRY TO FORCE BARCELONA MOVE
You have to say that it would be pretty disastrous for Manchester United if they lost Paul Pogba on the eve of the season. There is no guarantee that he can replicate his World Cup form in the Premier League, but United would be an awfully lot worse without him.

Tuesday morning brings reports in multiple papers that Pogba has instructed agent Mino Raiola to try and get him a move to Barcelona, and that Raiola is more than happy to do so. There lies the problem with climbing into bed with agents; sometimes they will go where the money is.

The reports also state that Pogba was unhappy with Jose Mourinho’s comments about Pogba’s World Cup performances, selling them in a negative way. Even if you believe that everything Mourinho said was accurate, this is a question of motivation and morale. What was to be gained from risking p*ssing off one of your best players?

The likelihood is that Pogba stays at Old Trafford, even with Barcelona having three extra weeks to get the deal done. But it’s a transfer story that Manchester United could really do without as they enter a season needing to get closer to Manchester City.

COURTOIS OUT, BUT WHO IN FOR CHELSEA?
It’s pretty clear that Thibaut Courtois is leaving Chelsea. The goalkeeper has used most tricks in the book to push a move through, and is now reported to have stopped turning up for training. It’s a this point that you remember him going on strike at Genk to get the Chelsea move.

The question now turns to Courtois’ replacement, and there is disagreement between England and Spain. Most English newspapers say that Jack Butland is the man, who is going to get a massive promotion despite his form for Stoke City being patchy at best since the start of last season.

In The Times, Matt Hughes writes that Chelsea could well end up paying more for Butland than they receive for Courtois, given the ticking down of the Belgian’s contract.

However, Spanish newspaper Mundo Deportivo reckon that Chelsea will pay the £89m release clause in Jan Oblak’s contract, which would be quite something. Butland sounds like the favourite to us.

WELBECK AVAILABLE FOR ARSENAL TRANSFER
It’s hard to see Danny Welbeck getting regular minutes at Arsenal this season. Alexandre Lacazette could well be picked nominally in a wide forward role but interchange with Pierre-Emerick Aubameyang, while Alex Iwobi’s new contract makes him likely to be given chances.

With Unai Emery keen to cut the club’s wage bill – particularly the money spent on fringe players – paying Welbeck £115,000 a week just seems a dim thing to do.

The Evening Standard say that Welbeck has been told by Emery that he will not be a regular this season, and therefore that the club will listen to offers for him. The two favourites to sign him are apparently Everton and Newcastle, but we can’t see either of those happening. A move abroad, perhaps?

AND THE REST
Mateo Kovacic is refusing to train with, or play for, Real Madrid again… Reiss Nelson is set to sign a new contract at Arsenal… Fraser Forster could move to either Besiktas and Fenerbahce in Turkey… Leicester City have told Manchester United centre-back Harry Maguire is not for sale at any price… Yannick Bolasie could be heading back to Crystal Palace… Bayer Leverkusen forward Leon Bailey says Chelsea and Liverpool want to sign him.