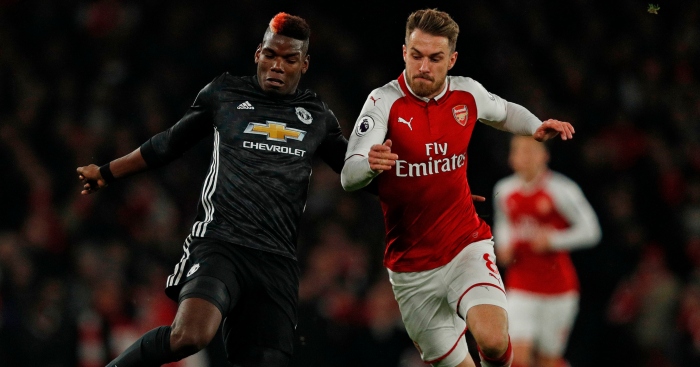 NO POGBA EXIT
‘MANCHESTER UNITED are playing hardball with Paul Pogba and refusing to sell this summer – even after his latest bust-up with Jose Mourinho,’ claim The Sun, whose reports of said bust-up were described by the club as “complete nonsense” on Thursday. But it does seem likely that they are right on this matter; there is no way that United can countenance the sale of their record signing this summer.

Pogba is said to have ‘set his heart’ on leaving United for Barcelona, but United need Pogba – both on the pitch and in marketing terms – and the smart money might be on Pogba lasting longer at United than his manager.

NO RAMSEY EXIT
Arsenal are said – by the Daily Mirror – to be very confident of keeping Aaron Ramsey at Arsenal and persuading him to sign a new contract. Hmm. Why does it feel like we have been here before? If the Welshman waits, he can leave for nothing next summer and command higher wages. All of which is probably enough to stop him falling into the clutches of Barcelona, or the usual unnamed Chinese Super League club.

REAL BETIS WANT MOURA
This comes straight from the horse’s mouth, with Real Betis vice-chairman Lorenzo Serra Ferrer saying this week: “They [Lucas Moura and Joao Mario] are two great footballers and if we have possibilities we would like to have them.” Now Mauricio Pochettino has said that players could leave this month despite a lack of summer signings, but Moura only arrived in January for £25m and he did start against Newcastle last weekend (though he did last only 68 minutes).

AND THE REST
Claude Puel hopes to loan out some of his fringe players before the international transfer window closes…Manchester City’s left-sided player Oleksandr Zinchenko could be set for a loan move to Real Betis or Girona in Spain…The transfer of Northern Ireland striker Kyle Lafferty, 30, from Hearts to Rangers is expected to go through in the next few days…Everton’s Dutch full-back Cuco Martina, 28, is weighing up loan deals with Championship sides Stoke and Middlesbrough…Arsenal’s 20-year-old English striker Stephy Mavididi is in talks over a permanent move to Juventus…Liverpool defender Ragnar Klavan is on his way to Cagliari.