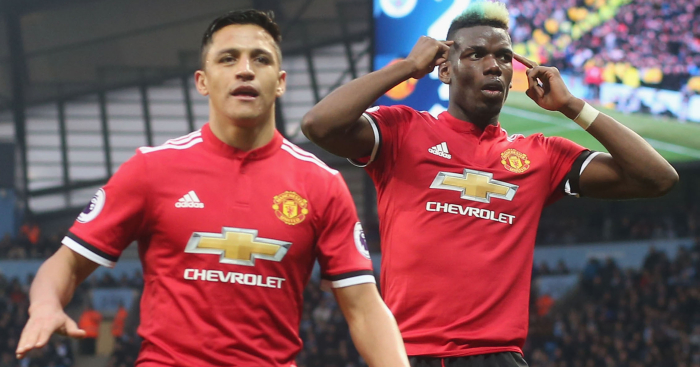 JOSE VERSUS THE WORLD
In news that comes as a surprise to absolutely no one, Paul Pogba has reportedly decided that he will quit Manchester United in January if Jose Mourinho remains in charge.

The Sun reckons Pogba ‘cannot be bothered to argue with the manager any more’ and ‘he is embarrassed at being played in formations and with tactics that none of the team can get to grips with’.

Pogba might want to take a look a rather more self-analytical look in the mirror, given most of these systems have been tried in a vain attempt to tease some consistency out of him.

Still, his commercial value will make him an attractive proposition for most clubs but Barcelona is the one he is most keen to join. The Barca board, though, is said to be split over whether to make a move for the 25-year-old.

According to ESPN, Pogba’s marketability appeals to Barca, especially while Josep Maria Bartomeu remains ‘obsessed’ by the thought of becoming the first club to turnover €1billion per season. Understandably, though, there is ‘division about the merits of Pogba on a playing level’.

Alexis Sanchez is reportedly equally fed up but perhaps even more so than Pogba, he has only himself to blame. The Chilean was dropped completely for the trip to West Ham and The Mirror reports that he spent the game ‘making it clear to everyone behind the scenes how angry and upset he was’.

Rather more surprisingly, Mourinho has apparently lost the backing of club skipper Antonio Valencia. The Daily Mail says Valencia was furious at being criticised for not attending last week’s Carabao Cup defeat to Derby and being axed for the West Ham debacle. Apparently, the captain is barely speaking to Mourinho. Though, to be fair, Valencia barely speaks to anyone…

ARSENAL EYE PEPE
Moving on from the chaos at United and on to Arsenal where things are strangely serene. It all feels rather odd.

Apparently, the Gunners are one of the clubs tracking Lille’s £30million-rated winger Nicolas Pepe.

The Ivory Coast star has bagged five goals and chucked in another five assists in just eight Ligue 1 games this season. Not surprisingly, such form has caught Barca, Sevilla and Everton’s attention while Lyon are said to have had a £26million bid rejected in the summer.

If Lille turned their nose up at that offer, presumably his performances this term will put him closer to the £40million bracket.

AND THE REST
Wolves are interested in Aberdeen defender Scott McKenna…Danny Drinkwater is not in a rush to quit Chelsea…Sergej Milinkovic-Savic has extended his Lazio contract until 2023…West Ham beat Man Utd, Barca, Arsenal, Tottenham and Everton to Issa Diop this summer…Chelsea are favourites to sign 15-year-old Volendam midfielder Sam Lautenschutz…Steve Bruce needs to win at least one of the games against Preston and Millwall to keep his job at Aston Villa.