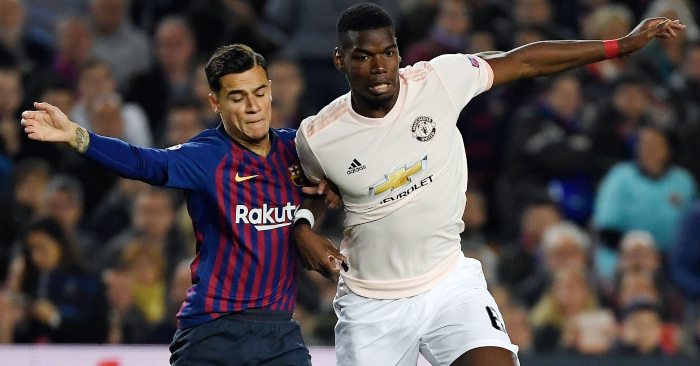 POGBA TO BE REWARDED WITH MASSIVE NEW DEAL
Goldfish catch on quicker than Ed Woodward. Having admitted he f*cked up badly by giving Alexis Sanchez a huge pay packet, there are reports the Manchester United vice-chairman could be about to make the same mistake all over again.

According to the Daily Mail, Woodward is willing to pay Paul Pogba £500,000 a week to convince the France star to stay at Old Trafford. Pogba has said he wants to go and reports suggest United’s coaching staff would prefer it if he was sold too. But Woodward knows best…

United are more preoccupied with trying to recruit. The Red Devils are reported to have had a second bid said for Aaron Wan-Bissaka turned down, with Crystal Palace looking for more than £50million.

West Ham are also said to have custard-pied United over an attempt to sign Issa Diop. Telefoot claims an offer of £40million plus an unnamed player was rejected by the Hammers. The Independent suggests that West Ham will be more open to a deal if Anthony Martial is chucked in. The France attacker could barely be arsed to turn up for United so we wouldn’t expect him to jump at this particular opportunity.

United are close to one signing: Juan Mata. The Daily Mirror says the Spaniard is set to agree a new one-year contract with the club.

PSG EYE COUTINHO AS BARCA PONDER NEYMAR RETURN
One player United won’t be signing is Philippe Coutinho. According to Sky Sports, the Barcelona flop won’t consider a move to Old Trafford out of respect for Liverpool, the club from which he tried to force an exit at the first hint of Barca’s interest. #class

Coutinho would be rather more interested in what PSG have to offer. AS claims the Ligue 1 side have already been in touch with the Brazilian’s agents with a view to securing a deal after the Copa America.

That will inevitably lead to speculation over a possible part-exchange deal for Neymar. Barca are keen to re-sign their former star but financing the deal is a problem, so Globoesporte has suggested that Samuel Umtiti, Ousmane Dembele and Ivan Rakitic could be chucked in as part-exchange.

AND THE REST
Bayern Munich have made no approach for Real Madrid outcast Gareth Bale… Frank Lampard is set to meet Chelsea owner Roman Abramovich on his yacht in St Tropez this week… The Blues will offer Lampard a three-year deal to replace Maurizio Sarri… Newcastle and Watford are interested in Rennes winger Ismaila Sarr… John Terry is among the candidates to replace Lampard at Derby… Chelsea have rejected £35m bids from Barcelona and Atletico for Willian… Aston Villa have made contact with Huddersfield over Terence Kongolo… Villa and Leicester are still scrapping to sign Luton’s £10m-rated full-back James Justin… West Ham are willing to pay the £13.4m release clause to take Joan Jordan from Eibar… Man City are considering bringing back PSV Eindhoven’s Angelino just a year after selling the left-back… Chelsea striker Martell Taylor-Crossdale is having a medical at Hoffenheim.