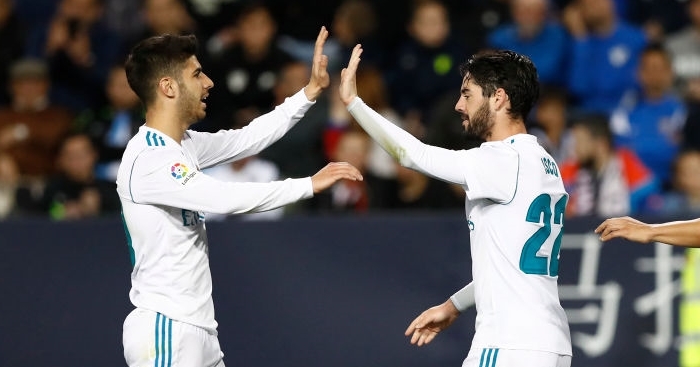 DANCE! I’LL TAKE YOU THERE
As the tiresome debates rages on as to whether fans of other Premier League clubs should support Liverpool in the Champions League final, it seems that the clubs themselves are trying to give the Reds a helping hand. As the two teams prepare to do battle in Kiev, the transfer speculation continues unabated.

The news from Spanish paper Mundo Deportivo is that Isco ‘is one of the great goals’ of Manchester City. He is one of Pep Guardiola’s ‘weaknesses’, with the manager convinced he would ‘adapt’ to football in England seamlessly.

The price has been set at around £70million, and Isco would be earning more at the Etihad. He has ‘felt treated like nobody at different times’ in Madrid, and is not ‘the president’s favourite’. Guardiola would love him a bit.

THE REAL DEAL
City are not thought to be one of the numerous Premier League clubs interested in Marco Asensio. And we say ‘interested’ – his agent has been fielding bids, apparently.

Horacio Gaggioli has been chatting to those good folks over at Cadena SER. “Madrid have received two offers for Marco Asensio, up to €150m (£131m), but the club rejected them,” he said. “He has an extraordinary future.”

Who was behind the offers?

“You can imagine that they come from England because they can afford it without any problems. They could even raise it.”

Well alright. Chelsea, Manchester United and even Liverpool have been linked with Asensio before. Have the cheeky beggars tried to land the first blow ahead of Saturday’s showpiece?

AN OLD MAN FROM THE OLD LADY
Arsene Wenger’s was officially Remi Garde, although he was essentially behind the arrival of Patrick Vieira. In 22 years’ time, when we look back on the empire that Unai Emery built in north London, we will remember his first signing as a 34-year-old right-back.

David Ornstein of BBC Sport says Stephan Lichtsteiner is headed to Arsenal. The Swiss international is out of contract with Juventus this summer, and ‘would add experience and leadership’ to the squad.

He would also give Hector Bellerin the chance to catch his bloody breath. Seems to make sense, really.

AND THE REST
Chelsea striker Michy Batshuayi says he will not decide until after the World Cup whether to return to the Stamford Bridge club. The 24-year-old Belgium international spent the second half of last season on loan at Borussia Dortmund… Tottenham will ask Manchester United for 22-year-old France forward Anthony Martial if Belgium defender Toby Alderweireld, 29, moves in the opposite direction… Chelsea could offer 25-year-old Spain striker Alvaro Morata to Inter Milan in exchange for Argentina forward Mauro Icardi, 25… West Ham are favourites to sign Barcelona defender Marlon. The 22-year-old Brazilian – who is on a two-year loan deal at Ligue 1 side Nice – is also a target for Leicester… Manchester City want to sign 26-year-old Italy midfielder Jorginho from Napoli,Leicester’s Algeria winger Riyad Mahrez, 27, and Bayer Leverkusen’s 20-year-old Jamaican forward Leon Bailey… Arsenal face competition from RB Leipzig to sign Chelsea’s Brazilian winger Kenedy, 22… Manchester United had hoped to sign Juventus’ Brazilian left-back Alex Sandro, but the 27-year-old is set for talks next week to extend his stay in Italy.