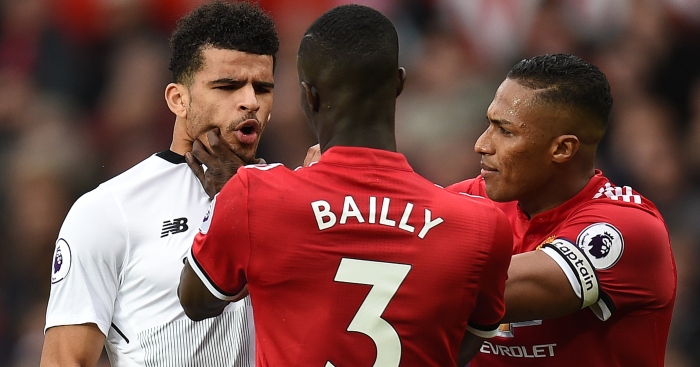 PALACE EXPECT SOLANKE ANSWER
Having previously offered Christian Benteke a route away from Anfield, Crystal Palace are apparently keen to take another of Liverpool’s striker flops off Jurgen Klopp’s hands…

According to the Daily Mail, Dominic Solanke is weighing up an offer to move to Selhurst Park on loan for the rest of the season and the England Under-21 international is expected to a make a decision in the next couple of days.

In terms of whether or not he should leave Liverpool, there is surely no decision to be made. Solanke has not played a single minute in any competition for Klopp this season and that hardly looks like changing. His dilemma is over which destination to choose.

Huddersfield are also said to be keen on the 21-year-old and Lord knows the Terriers need some help in attack. They sit at the bottom of the table having scored fewer goals than anyone else in the Premier League. Brighton are sniffing too, but they are said to prefer a permanent deal for Solanke, who presumably has to decide whether he might ever break into Liverpool’s first-team squad. It doesn’t look good.

Another Liverpool talent who could be off on a jaunt between January and the end of the season is Raul Camacho. The Liverpool Echo reckons Sporting Lisbon have asked to take their former schoolboy back for the rest of the season.

BAYERN TOO LATE FOR CHELSEA WINGER?
The future looks bright for Callum Hudson-Odoi, wherever he ends up playing his football. The Chelsea academy graduate is finding first-team football hard to come by at Stamford Bridge, even though the Blues are supposedly very keen to keep the 18-year-old. But with 18 months left on his contract and Christian Pulisic supposedly a target, Hudson-Odoi is ready consider his options. And he has a few tempting ones…

Borussia Dortmund are said to be extremely keen on the winger, with Jadon Sancho’s success now putting them in the frame for any English talent finding it hard to make the breakthrough in the Premier League. But Bayern Munich also want a piece of that market too and the Daily Mail suggests the Bundesliga giants are ready to table a £13million offer in January.

Presumably Dortmund could make things difficult for Chelsea over Pulisic if they don’t get first dibs on Hudson-Odoi, and Bild is reporting that a deal for the USA international has already been agreed, with the Blues paying £45million. That represents decent value for Chelsea, so presumably there is a sweetener elsewhere for Dortmund.

AND THE REST
The agent of Sevilla midfielder Ever Banega is in London to thrash out a move to Arsenal… Luka Modric has rejected a new contract at Real Madrid… AC Milan have denied that Chelsea have made an approach for Gonzalo Higuain… PSV Eindhoven forward Hirving Lozano is one of Chelsea’s top targets…Manchester City midfielder Brahim Diaz will join Real Madrid for £13.5m plus add-ons… Arsenal, Everton and West Ham are all interested in Manchester United midfielder Andreas Pereira…Aston Villa have pulled out of a deal to sign Chelsea centre-back Gary Cahill because of the cost involved… The former England defender is also being linked with Arsenal.