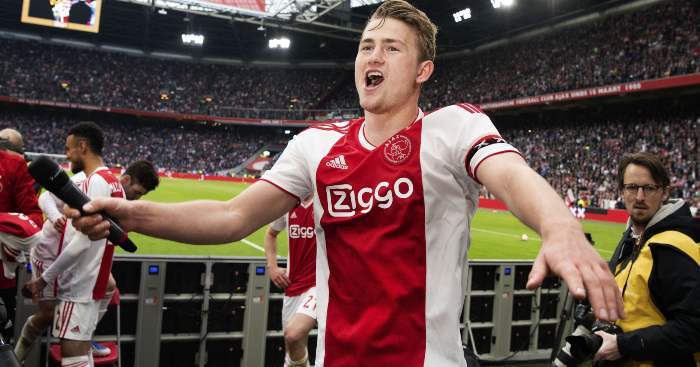 PSG ON POLE FOR DE LIGT
It’s all going off at PSG. The Ligue 1 champions were hoping for a quiet month while they shifted some deadwood off the wage bill but, apparently, the Parisians have pushed in at the front of the queue for Matthijs De Ligt.

Marca reckons Barca and PSG are the only two clubs left in the hunt for the Ajax defender but ESPN puts Thomas Tuchel’s side firmly in the lead, thanks in no small part to the work former sporting director Leonardo, who is said to be returning to the club.

The Brazilian is said to be in constant contact with Mino Raiola, who has been trying to squeeze a few more euros out of Barca for weeks now. The Catalans reluctant to meet the agent’s demands but PSG appear only too willing. Le 10 Sport also claims they will move again for Everton midfielder Idrissa Gueye.

Should PSG snare De Ligt, then they hope to raise approximately half of the transfer fee by selling Presnel Kimpembe for around £35million, while Thiago Silva could also be sold.

Barca also have a role to play in another of the transfer plots surrounding PSG. Sport claims Neymar has informed the club that he only wants to join his former side this summer having rejected Real Madrid’s overtures.

Another big name who could swap Paris for Barcelona is Gianluigi Buffon. The Italy legend is available after leaving PSG upon the expiry of his contract and Sky Italia reckon Barca want him to sit on their bench if Jasper Cillessen is to leave the Nou Camp.

SPURS OFFERED DRAXLER DEAL
One of the big hitters PSG want rid of is Julian Draxler so, according to the Daily Star, they have offered the Germany midfielder to Tottenham for £35million. Which is nice of them…

It seems Spurs aren’t interested, however, especially given the salary Draxler would expect. Real Betis midfielder Giovani Lo Celso remains a priority and they are also keen on Lucas Digne.

But Everton won’t sell willingly. The Daily Star suggests the Toffees will demand Danny Rose carrying a suitcase full of cash in exchange for their player of the season.