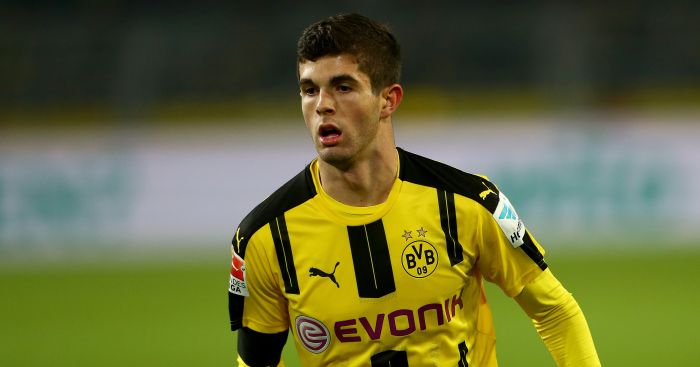 MANCHESTER UNITED WANT PULISIC
We have the return of our old friend ‘monitoring’, a word often used but one that we just can’t help thinking is a bit of a non-story. The Daily Mail report that Manchester United are ‘monitoring’ Christian Pulisic, but what is monitoring?

If it just means ‘occasionally scouting and keeping track of his progress’, then of course United are doing that. He’s 19, he has enjoyed a magnificent rise and he doesn’t play for a truly elite club. With their vast scouting network, it would be more weird if United weren’t ‘monitoring’ Pulisic.

Still, there’s no doubt that Jose Mourinho does want a winger. Which is why we’ve had stories about Malcom, Willian and Mesut Ozil. And now Pulisic.

BONUCCI TO CHELSEA OR MANCHESTER CITY
We’re off to Goal.com now, and one of their Italian reporters Romeo Agresti. Yer man says that Milan central defender Leonardo Bonucci will again be the subject of interest from Chelsea and Manchester City, both of whom would like to improve their defences in January.

Bonucci only moved to Milan from Juventus in the summer, but they are limping through this Serie A season and therefore the two Premier League clubs believe that they can tempt him away from the San Siro.

Agresti points out that the 30-year-old would not be cup-tied in the Champions League, but also says that Milan would at least want to recoup the £38m they paid for Bonucci.

GAITAN FANCIES PREMIER LEAGUE MOVE
This one doesn’t come from a newspaper, but straight from the horse’s mouth. Or at least the mouth of the horse’s agent.

Jose Iribarren, who represents Nicolas Gaitan, says that his client will be leaving Atletico Madrid in the January transfer window having failed to establish himself in the first team under Diego Simeone. Gaitan has been linked with a move to Manchester United for almost as long as Wesley Sneijder has.

“I can tell you English clubs are interested,” Iribarren told Foot Mercato. “Yes, he’ll undoubtedly leave Atletico in January. He has a lot of concrete offers. Nicolas was an important player when he played in Argentina, at Benfica and with the national team.

“He can’t continue in these conditions. If he can’t play a string of matches, nor win the coach’s trust. A player wants to play. We’re going to see with Atletico which solution we can find.”

Rough translation of “I can tell you English clubs are interested”: My client fancies a move to the Premier League.

AND THE REST
Manchester City are almost certain to sign Arsenal striker Alexis Sanchez in the summer… Matteo Darmian could be on his way out of Manchester United in the January transfer window, with Napoli lining up a move… Burnley are back on the trail of Bordeaux forward Nicolas de Preville… Liverpool are competing with Borussia Dortmund for Basel centre back Manuel Akanji… Arsenal will launch a £35.4million move to bring Juventus star Daniele Rugani to the club.