Home All The News Gossip: Raheem to Real, £50m Rose to Man United… 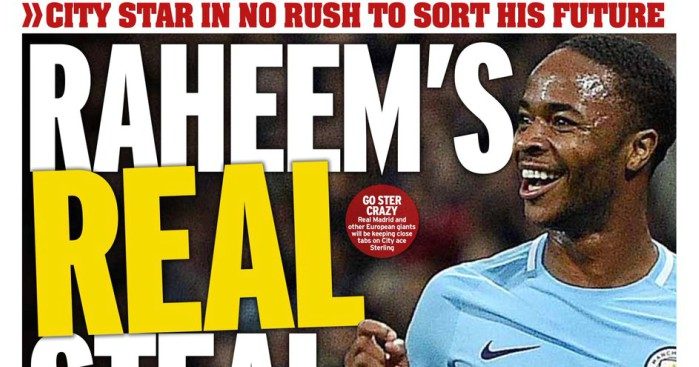 RAHEEM TO REAL MADRID?
Well, that might be the impression that you get from the back-page headline on the Daily Mirror, but actually John Cross plays down his own story by the second paragraph.

‘Raheem Sterling has put talks over a new contract on hold until after the World Cup.

‘And that could alert Real Madrid to renew their interest in the Manchester City forward after they were heavily linked with him two years ago.’

Meanwhile, The Times say that Eden Hazard is stalling on a new Chelsea deal because he wants a move to Real Madrid. Which sounds more likely.

DANNY ROSE TO MAN UNITED (AGAIN)
‘Jose Mourinho believes Danny Rose will become Manchester United’s next first-choice left back in a £50million deal,’ claims the Daily Mail, who are unsure whether the deal will happen in January or in the summer. This really must signal the end of Luke Shaw’s Manchester United career.

Negotiations with Tottenham chairman Daniel Levy are already being described as an ‘arduous task’ but getting £50m for a player seemingly not in Mauricio Pochettino’s plans seems like a very good deal indeed.

Well this is new. Spurs are apparently searching for a long-term replacement for Mousa Dembele and could settle on Frenchman Kondogbia, currently on loan at Valencia from Inter Milan. The problem could be that Valencia apparently believe they have first option on Kondogbia, who has scored three goals in their unexpected La Liga success this season.

N’ZONZI IN LONDON
Former Blackburn and Stoke midfielder Steven N’Zonzi is desperate to get out of Sevilla and seeks a return to the Premier League, where he has reported suitors in the shape of Everton and Arsenal, where he would be a massive upgrade on Granit Xhaka.

Spanish news outlet Cadena Cope do not reveal his destination but they do say that the Frenchman has been given permission to come to London to sort out his affairs. Resist the lure of Sam and join Arsenal, Steven.

AND THE REST
Arsenal are willing to sell Theo Walcott in January, with his former club Southampton and West Ham interested in the England winger…Newcastle boss Rafael Benitez wants £20m in the January transfer window to buy a striker, playmaker and left-back…West Ham could face competition from Real Madrid for 27-year-old Krasnodar and Russia striker Fyodor Smolov…Ahmed Musa’s loan move from Leicester City to Hull City looks to be off following the sacking of Tigers boss Leonid Slutsky.