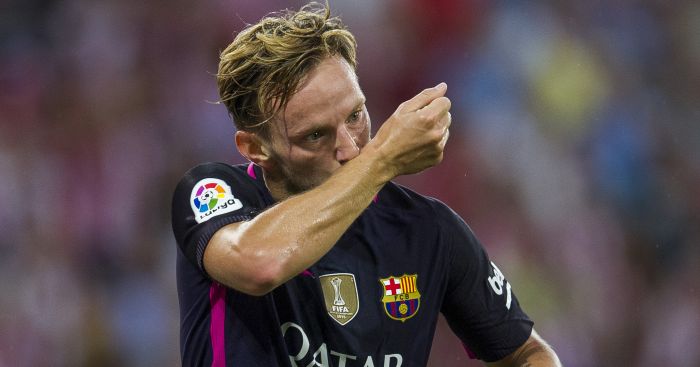 RAKITIC TO MAN UNITED…AT A STRETCH
There’s more than the usual amount of conjecture here as reports in Spain suggest that Manchester United could target Ivan Rakitic this summer. We know United want midfielders so this is an easy hit, but why would a first-choice Barcelona midfielder leave for United?

Rakitic will claim the landmark of 200 games with Barcelona should he play against Las Palmas tomorrow. He’s featured in 89.2% of games since joining the club, has won 9 trophies at Barça and scored 30 goals #fcblive [sport]

VIDAL FOR CHELSEA…IF CONTE STAYS
He is the one player Antonio Conte has said he would ‘go to war with’, having been part of his very successful Juventus side, and now reports in Italy say that the pair could be reunited at Chelsea this summer, with Bayern Munich reportedly ready to sell the Chilean.

Of course, this only works if Conte decides to stay at Chelsea, which seems pretty unlikely right now. It seems more likely that Conte will return to Italy…which might well suit the 30-year-old Vidal a little better.

JUVE SPEAK OUT OVER EMRE CAN
They have long been linked with a free transfer move to Liverpool midfielder Emre Can, but the Old Lady claim that they have other options, as the German stalls on a decision.

Juve chief executive Giuseppe Marotta said: “He is one of the most interesting players on the market today, for his talent, but also because his contract ends next June. It’s normal that (his) situation has attracted a number of suitors for him as a player.

“We know we will face competition from the best clubs in the world. The final decision is up to the player himself. If he decides to come to Turin we will be happy, otherwise we will look for other solutions.”

Meanwhile, in other Italian reports, Liverpool have been told they’ll have to pay £45million for Cagliari midfielder Nicolo Barella after Juventus joined the race.