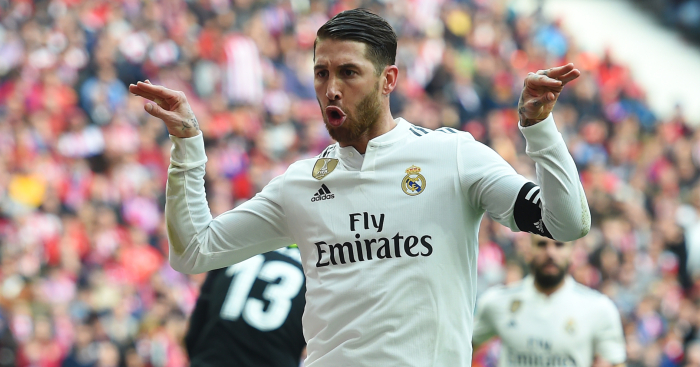 MAN UTD LINKED WITH REAL’S RAMOS
Ed Woodward can be forgiven a lot if he brings Sergio Ramos to Manchester United this summer. He doesn’t even have to be any good anymore, just a regular dose of his own-brand piss-boiling sh*thousery would make the Spain defender a worthwhile investment.

According to several sources in Spain, it is a realistic prospect. Ramos’s relationship with Real Madrid president Florentino Perez has deteriorated after a poor season for both the club and the player and Ramos reportedly still holds a grudge after Perez entered the dressing room and unloaded on the underperforming stars after their Champions League exit at the hands of Ajax.

Ramos has two years left on his contract and…. ah. There we have it.

The 33-year-old has played this game before. Magnificently, too. In 2015 he flirted with United who were persuaded into making a £28million bid which Real rejected. Ramos insisted he wanted the club to negotiate with Woodward and, boom, Real instead laid out a new contract.

Zinedine Zidane has no desire to lose Ramos as part of the clear-out at Real this summer so we all know where this is heading.

DE LIGT LEARNING FROM THE BEST
Matthijs De Ligt obviously catches on quick too. The Ajax defender, who seems set for Barcelona if a few more euros can be squeezed out of the Catalans, has added his own modern twist to the oldest trick in the book by ‘liking’ Rio Ferdinand’s Instagram post celebrating United’s 2008 Champions League triumph.

Mino Raiola seems to have teased United into upping their offer to De Ligt, which was already worth £12million a year. Which is wonderful news for the agent in his efforts to turn the screw on Barca.

GRIEZMANN RUNNING OUT OF OPTIONS
Barca, though, are rather less keen on signing Antoine Griezmann. Their reservations are understandable, particularly after being dragged into his documentary saga last summer. So they might welcome the news that United are willing play the patsy here too.

With similar antics recently, Griezmann has pissed off Atletico to the extent that he has been told there is no going back on his decision to quit the club. It was presumed that Barca would cough up the £108million to get the France star out of his contract but The Independent claims some senior figures at the Nou Camp believe the money could be better spent elsewhere.

Enter Woodward. The story goes that United have re-established contact with Griezmann’s camp, which is handy for the 28-year-old because he has few other options. Man City and Bayern Munich aren’t interested; Juventus can’t afford him; and PSG have no plans to get involved either.

SPURS TO GO CHERRY PICKING
United aside, the Big Six club likely to make the biggest splash in the market this summer could be Tottenham. They could begin by raiding Bournemouth for two of their best players.

The Daily Mail reckons Mauricio Pochettino is planning an £80million offer for David Brooks and Callum Wilson. With Ryan Fraser being linked with a £30million move to Arsenal, this could be  tricky summer for Eddie Howe.

The Bournemouth boss is already in a fight for Nathaniel Clyne. The Liverpool full-back spent the second half of the season on loan with the Cherries but Sky Sports says Napoli, Palace and West Ham are also interested in the £15million-rated right-back.

AND THE REST
Arsenal will sell Henrikh Mkhitaryan as they step up their interest in Ryan Fraser… Marcos Alonso could leave Chelsea this summer… Eden Hazard wants his move to Real Madrid wrapped up by June 4… Everton are favourites to sign Danny Welbeck on a free transfer… Atletico Madrid and Valencia are both keen on Radamel Falcao… Marseille will appoint Andre Villas-Boas as their new boss.