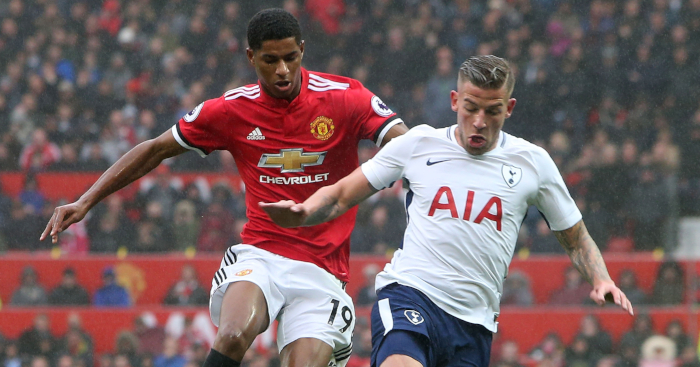 RASHFORD TO GET ROONEY WAGES
Well, it seems only fair. After everybody spent months pretending that Marcus Rashford might actually leave his beloved Manchester United – because his agents did not want the club to take him for granted – the Daily Mirror report that the striker is on the verge of signing a new deal. What a shocker.

It seems that asking for Wayne Rooney’s old terms of £300,000 a week has worked for the Englishman, who will earn £78m over the five years of a contract he is unlikely to actually finish. Now he can concentrate on the small matter of scaring the sh*t out of Barcelona with his pace.

OPERATION TOBY ON AGAIN
‘MANCHESTER UNITED are back in for Toby Alderweireld,’ begins the report in The Sun, who claim that Ole Gunnar Solskjaer see the Belgian as the man to ‘slot straight in’ to their defence, despite all their talk of targeting only young players. It seems the Tottenham centre-half – available for just £25m this summer – is just too tempting to resist. On the evidence of Tuesday night against Manchester City, they absolutely should not resist.

HAZARD WILL FORCE CHELSEA’S HAND
There has clearly been a briefing from Eden Hazard’s people, as there are a glut of stories about Eden Hazard’s desperation to leave Chelsea for Real Madrid this summer, which could force the Blues to sell for less than the £100m they are demanding for the Belgian.

Hazard is out of contract next summer so Real Madrid are unwilling to pay more than around £86m. The word from Hazard’s camp is that he will not sign a new contract with the London club so any refusal to sell to Real could mean that he will leave for nothing – and potentially to another English team – next summer. And they really don’t want that.

AND THE REST
Jan Oblak is about to sign a new deal at Atletico Madrid…Liverpool could lose Rafael Camacho this summer…Southampton will move for Che Adams again…Arsenal and Tottenham are still being listed as ‘potential’ suitors for Ivan Perisic.