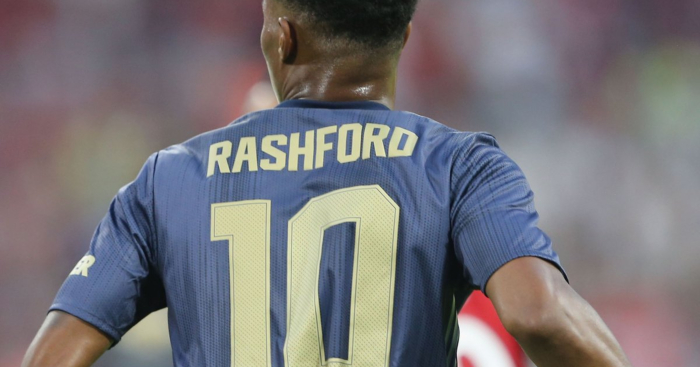 MAN UTD TO DOUBLE RASHFORD MONEY
All that talk of Marcus Rashford being a target for Europe’s top clubs – Tuesday’s claim was that Real Madrid thought they could get him for £50m – may well have the desired effect, with the Daily Star exclusively claiming that the England star will see his wages doubled with a new Manchester United deal.

‘Woodward wants to tie Rashford down to a new and improved deal before the end of this season and is willing to double his wages to £150,000-a-week plus bonuses,’ says The Daily Star.

We struggle to believe that any European super clubs have serious designs on Rashford; clubs like Real Madrid have not aggressively pursued English players for several years. When will that ever change? England may need to become the best in the world to make that happen.

LIVERPOOL AND BARCA IN NON-TRANSFER AGREEMENT
To be perfectly honest, this has confused us a tad, but the word from Spanish radio station Cadena Ser is that Barcelona and Liverpool agreed – as part of the deal that took Philippe Coutinho to Spain – that no Liverpool player would move to Barcelona for three seasons. So that would leave Mo Salah, Sadio Mane, Roberto Firmino and James Milner away from their grasping hands.

We take the story from AS, who write that ‘Barcelona agreed not to sign any Liverpool player, unless the Anfield side are in agreement with the move, for a total of three seasons as part of the transfer of Coutinho to the Camp Nou’. But surely no transfer happens unless the selling club ‘are in agreement with the move’? So we can only presume that the agreement – if it exists – is that they will not pursue any players without encouragement.

If Barcelona offer £100m for Alberto Moreno, we suspect Liverpool will not enforce this agreement.

DE JONG ONE TO COST SERIOUS MONEY
‘Manchester City will have to pay a club-record £75million in the upcoming bidding war with Barcelona for the new Johan Cruyff,’ writes the Daily Mirror. No pressure then fella. The crux of the story is that Ajax are not going to sell 21-year-old midfielder Frenkie de Jong for pennies, knowing full well that most of Europe’s top clubs are eyeing a player that Pep Guardiola reportedly sees as the long-term successor to Fernandinho. Does that make Fernandinho the old Cruyff?

‘Ajax are insistent they do not want to sell De Jong in the upcoming January window and will not consider cashing in on him until the summer at the earliest,’ continues the Mirror.

He really is rather good.

Everyone now knows just how good this kid is on the ball, but it's his work off the ball that is now getting recognition.

He's quick, he's strong for his size, and he anticipates so well. A truly complete midfielder. pic.twitter.com/4qU3TMk2Wo

AND THE REST
Christian Eriksen is a target for PSG as well as Real Madrid…Real Madrid are trying to convince Spanish midfielder Brahim Diaz not to renew his contract with Manchester City…Chelsea face the prospect of Ruben Loftus-Cheek asking to move on loan in January after renewed interest in the midfielder from Crystal Palace and Schalke…Leicester City are keen on signing Arsenal’s 26-year-old Egypt midfielder Mohamed Elneny…French club Nice want to sign Liverpool’s Belgium goalkeeper Simon Mignolet in January…West Ham are lining up a £5m January move for Olympiakos’ Brazil-born Greek international left-back Leonardo Koutri…Wolves held talks with the representatives of Senegalese striker Mbaye Diagne  over a January transfer move from Turkish side Kasimpasa…Bayern Munich will rival Chelsea for Borussia Dortmund star Christian Pulisic.