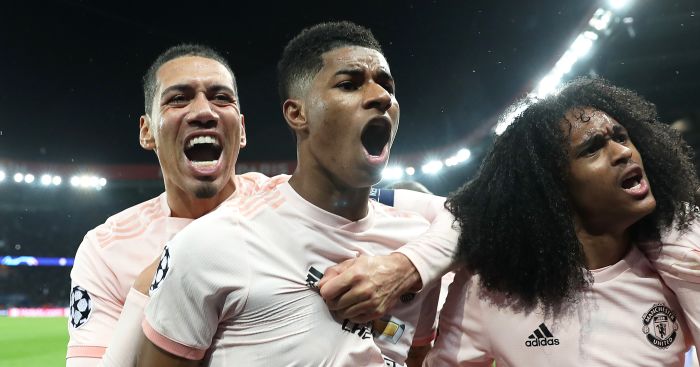 BARCA READY TO TEST UNITED RESOLVE
Marcus Rashford’s name sits proudly on the three-man summer wishlist compiled by the transfer boffins at Barcelona, according to the Google translate operatives at The Mirror. Someone has apparently scrawled £100m next to his name.

By happy and utter coincidence, Barcelona and Manchester United will meet in the Champions League quarter-finals to make the story just that bit more interesting.

Until and unless Rashford signs that new double-your-wages contract at United, these stories will continue even if always caveated with the proviso that he ‘has no desire to leave his boyhood club’. He’ll be out of contract next summer.

GUNNERS WAGE WAR
Unai Emery needs to trim the wage bill at Arsenal, and that means bye bye Mesut Ozil (£350,000 a week) and Henrikh Mkhitaryan (£180,000 a week) according to the Mirror. Now they just need to find buyers for the 30-somethings…

Mohamed Elneny, Calum Chambers and Shkodran Mustafi are all likely to be moved on, with the Gunners unlikely to take up the permanent option on loan signing Denis Suarez. With Aaron Ramsey’s departure to Juventus already confirmed, Petr Cech set to retire and Danny Welbeck likely to be released, that’s a lot of players through the exit door.

Emery’s no fool, though. He’s done the maths. His plan is to replace those players with some other players. Four of them, apparently. Left-back, left winger, central defence and attacking midfield are the four areas identified, with Kieran Tierney and Nicolo Barella among the names on the list.

CHELSEA REFUSE TO BUDGE
Chelsea remain willing to take a massive financial hit by refusing to sell England’s newest international Callum Hudson-Odoi even if he refuses to sign a new contract. That’s a lot of refusing.

The 18-year-old had a £35m move to Bayern Munich blocked in January, and remains resolute in his determination to leave Stamford Bridge according to The Times. Bayern are still keen, as are Manchester United.

His contract is up next summer, so assuming that new contract remains unsigned this is probably the last window where Chelsea can expect to fetch anything like the sort of sums being bandied around during January. They’re not bothered.

AND THE REST
Chelsea hope Eden Hazard ‘does a Griezmann’ and signs a new contract out of pity…Arsenal target Adrien Rabiot is set to be fined by PSG for partying at a nightclub after the club’s Champions League exit…Manchester United have done some quick maths and reckon Ole Gunnar Solskjaer has saved them £50m on a new centre-back…Tottenham want to host the Super Bowl at their new stadium…James McClean told Declan Rice to “sod off” after his switch to England.