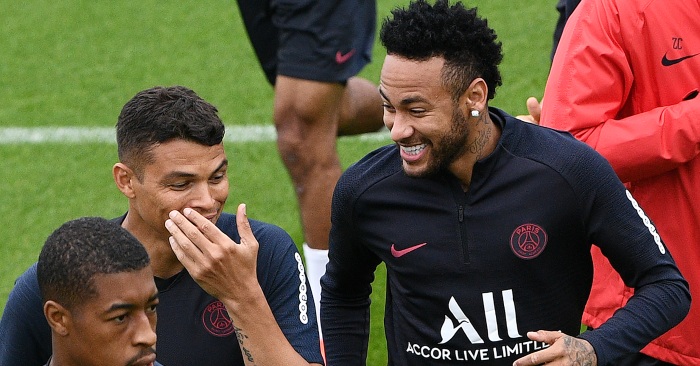 NEY MORE PROGRESS
With 11 days to go until the European transfer deadline, PSG are still waiting for both Real Madrid and Barcelona to sh*t or get off the pot. Real and Barca both claim to want Neymar but PSG appear to be catching on to the fact that neither club can afford the Brazil superstar.

Apparently, PSG are considering putting a deadline in place for Neymar’s suitors before the hard deadline of September 2. Marca reckons Real have a delegation in France right now to negotiate a deal, though L’Equipe claims they had no joy with their opening gambit of £91m plus James Rodriguez, Gareth Bale and Keylor Navas. More on Navas in a bit…

ESPN reports that Barca have recently put forward two proposals. The first, a part-exchange involving Philippe Coutinho and Ivan Rakitic plus £72million was rejected last week before a loan payment plus an obligation to buy next summer totalling £171million was custard pie-d earlier this week.

Barca are said to be waiting for Neymar to go public with his desire to return to Barca, which would weaken PSG’s bargaining position and cut Real out of the picture.

PSG TO GO AGAIN FOR NAVAS
PSG also have other matters to attend to, one being the signing of a goalkeeper.

Apparently, Thomas Tuchel fancies Real stopper Navas, who is equally keen to move rather than sit on the Bernabeu bench. The two clubs reportedly had an £18.1million deal agreed earlier in the window before changes in the PSG boardroom put the agreement on the back burner.

But Marca says Navas has made clear his desire to leave Real and all parties are willing to reignite the original deal.

REAL EYE PREM STOPPERS
That leaves a vacancy for a splinter-picking gloveman at Real.

AS reckons Pepe Reina is a contender and the former Liverpool stopper is certainly an experienced bench-sitter. Reina currently perches his cheeks in the AC Milan dugout having sat so diligently before for Bayern Munich. Whether Reina would consider burning his Barca bridges just for a Real season ticket is unclear…

Marca also mentions Reina but they put forward three other candidates, two from Premier League clubs. Chelsea stand-in Willy Caballero is one; Maarten Stekelenburg, currently Jordan Pickford’s back-up at Everton, is the other. The fourth name in the frame is Monaco’s Diego Benaglio.

If Real get desperate, on the F365 books, there’s a past-it keeper in his late 30s who enjoys nothing more than a good sit down. #bienvenidoWatson

AND THE REST
Man Utd will have to pay £12m of Alexis Sanchez’s wages this season even if he moves to Inter Milan… United have made an offer to former Tottenham striker Fernando Llorente, while free-agent Wilfried Bony remains an option… Fenerbahce have backed away from a move for United defender Marcos Rojo… Leicester midfielder Adrien Silva will undergo a medical with Monaco on Friday… Christian Benteke and James Tomkins are in talks over new deals with Crystal Palace… Fenerbahce have distanced themselves from a move for Manchester United and Argentina defender Marcos Rojo… Barca have rejected an offer from Inter Milan to take Arturo Vidal on a season-long loan… Bayern Munich midfielder Renato Sanches could be heading to Lille.