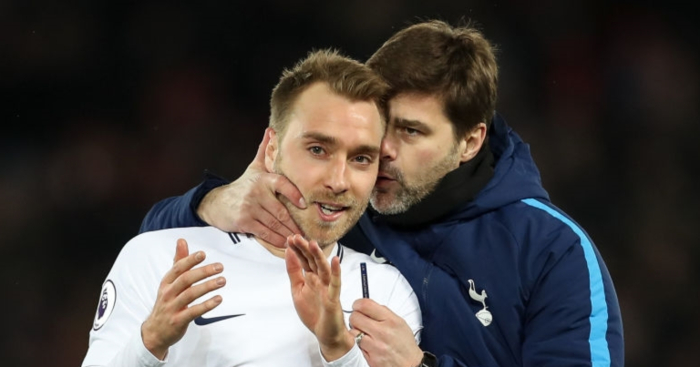 REAL MADRID TO MAKE ERIKSEN MOVE?
Just because English clubs can no longer buy players, it doesn’t mean that the transfer rumours have ceased. We start Sunday morning with an exclusive from The Sun, and it’s a ballsy one.

Mike McGrath writes that Real Madrid will make a move for Christian Eriksen if they sell Luka Modric to Inter. He uses Eriksen’s unsigned new contract as evidence that a move could happen.

PUEL HAS TWO GAMES TO SAVE HIS LEICESTER JOB
The lack of patience and forethought in football does sometimes get overblown. People wring their hands about managers being sacked but suddenly go very quiet when their replacements do very well. Still remember Leicester being criticised for sacking Nigel Pearson, and that turned out ok.

But if Leicester sacked Claude Puel three games into the new season, having built a squad for him over the summer, that would be several strands of bloody harsh. The Sunday Mirror says that Puel has two games to save his job, which seems pretty bleak given that they played pretty well against Manchester United.

Tom Hopkinson writes that Puel is ‘clinging onto his job’ with Leicester’s owners ready to ‘wield the axe’ if results don’t improve over the next two games. They mention both Roberto Martinez and Thierry Henry as potential replacements. Giving Henry his first job in football at Premier League level two games into a season would be absolutely sodding mental.

MAN UNITED TO APPOINT DIRECTOR OF FOOTBALL
Hoo boy, the fallout from Manchester United’s summer continues with the Guardian’s claim that the club is looking to appoint a director of football. It’s a story that has clearly been leaked to a number of people in the media.

On the one hand, you might think that Jose Mourinho would be happy with this development. It would take the transfer power away from Ed Woodward, who has proven himself incapable of organising a decent session in a brewery again this summer.

On the other hand, Mourinho may feel that this is the start of a plan to remove his own power in preparation for his eventual departure. The Portuguese has always liked to have total control over transfers and first-team affairs. Is this a message that the age of the omnipotent manager is another step closer to extinction?